Bhramam: Did You Know Prithviraj Sukumaran’s Thriller Is the Third Sriram Raghavan Film To Be Remade in Malayalam? (LatestLY Exclusive)

Bhramam is the second remake of AndhaDhun to arrive on the platform within a matter of couple of weeks, the first being the Nithiin-starrer Telugu film Maestro. 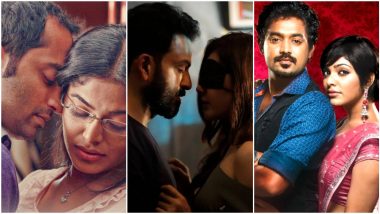 By now, all you Malayalam movie buffs might be knowing that the new Mallu movie in town, Bhramam, is a remake of the 2018 Bollywood black-comic thriller AndhaDhun, directed by Sriram Raghavan. Bhramam is directed by the famed cinematographer Ravi K Chandran, and stars Prithviraj Sukumaran, Mamta Mohandas, Unni Mukundan, Raashi Khanna, Jagadeesh and Shankar Panicker. The movie is now streaming on Amazon Prime Video, receiving mixed response from the viewers and the critics. Bhramam Movie Review: Prithviraj Sukumaran and Mamta Mohandas’ Remake Comes Nowhere in the League of AndhaDhun.

Now Bhramam is the second remake of AndhaDhun to arrive on the platform within a matter of couple of weeks, the first being the Nithiin-starrer Telugu film Maestro. Both films, while being faithful to AndhaDhun, just couldn't recreate the brilliance that Sriram Raghavan brought to the original. To be kinder to these remakes, they do establish what a pulpy, masterful storyteller Raghavan is.

Watch the Trailer of Bhramam:

Sriram Raghavan's debut film is the gritty Ek Hasina Thi, that continues to be his most underrated work to date. The thriller, starring Urmila Matondkar (her best performance easily) and Saif Ali Khan (challenging Omkara in being his finest negative role), underperformed at the box office then but received good reviews from the critics.

While not an exact remake (thankfully), Ek Hasina Thi did heavily influence Aashiq Abu's 22 Female Kottayam, starring Rima Kallingal and Fahadh Faasil. While Ek Hasina Thi felt a more tight and pulpy affair, 22 Female Kottayam was a deeply disturbing movie because Abu added the angle of rape and sexual harassment in the vendetta saga. Even how the heroine metes out revenge on her former lover turned betrayer will make your stomach turn at the very idea.

Watch the Trailer of 22 Female Kottayam:

22 Female Kottayam received good reviews during its release, especially for the performances of the lead actors, but it was also criticised for its influences. Unlike the original, it was a decent performer at the box office.

The same cannot be said about the remake of Johnny Gaddaar, the movie that was Raghavan's breakout success and in my humble opinion, still remains his best film to date. The original marked the lead debut of Neil Nitin Mukesh, and featured an excellent cast in Rimi Sen, Zakir Hussain, Vinay Pathak, Ashwini Kalsekar, Dayanand Shetty, Govind Namdeo and Dharmendra. Filled with some nice surprise twists and a terrific ending, Johnny Gaddaar left both critics and viewers impressed. Sriram Raghavan Birthday: From Ek Hasina Thi to AndhaDhun, All Movies Directed by the Acclaimed Filmmaker, Ranked, and Where to Watch Them Online.

Watch the Trailer of Johnny Gaddaar:

As for the Malayalam remake, it was a terrible idea to adapt right from the start. Unnam, that came out in 2012, retained the same plot but not the same impact. Interestingly both Unnam and 22FK had Rima Kallingal as the female lead, while Asif Ali got into NNM's shoes here. The movie was criticised for bringing nothing new in the table, serving a tired adaptation in the process and also suffering from miscasting (no one could really buy Sreenivasan as a vicious corrupt cop).

Watch the Trailer of Unnam:

The tragic part about Unnam is that it is one of the many weak recent directorials of the great Sibi Malayil, who once gave Malayalam cinema enough gems like Thaniyavarthanam,  Ezhuthapurangal, Kireedam, Dasharatham, Bharatham, Akashadoothu among others.

Now that even AndhaDhun has been remade in Malayalam, is anyone in Mollywood eyeing Badlapur and Agent Vinod now?

(The above story first appeared on LatestLY on Oct 07, 2021 12:10 PM IST. For more news and updates on politics, world, sports, entertainment and lifestyle, log on to our website latestly.com).