Dhanush plays a gangster Suruli in Jagame Thandhiram. However, this is not the first time, the actor will wow us with his performance as a crime lord. And so, here we list other films which saw the South star as a gangster. 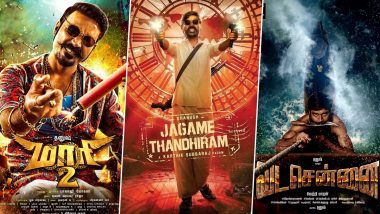 Dhanush is a superstar down South. Over the years, he has given many hits in Tamil cinema and his fans love him. His next movie which has created a lot of buzz is going to be Karthik Subbaraj's directorial Jagame Thandhiram. In the same, Dhanush plays the role of a gangster named Suruli. Right from the teaser to the trailer, the movie looks promising and will release on Netflix on June 18. However, this is not the first time, the actor will wow us with his performance as a crime lord. And so here we list Dhanush's other films where he played a gangster. Jagame Thandhiram: Dhanush’s Action Thriller To Release On Netflix!

This film saw Dhanush (Kokki Kumar) as a boy who runs away from his home after he sees his mother dead. Ahead, he gets hired by gangsters and soon also becomes the right-hand of the crime lord. He then makes many enemies by doing ill things. The movie was critically acclaimed.

Dhanush made the audience crave for more with Maari. He played a gangster with a heart and even nailed the fighting scenes. Maari and Maari 2 starred different female leads, but Dhanush's badass character was one of the best of his career.

Directed by Vetrimaaran, this movie saw Dhanush (Anbu) as an ace carrom player who dives into the crime world by joining hands with local gangsters to settle their feuds. However, the end will make you scream wow when he takes the goons down. Jagame Thandhiram Movie: Review, Cast, Plot, Trailer, Streaming Date and Time of Dhanush, Aishwarya Lekshmi’s Film Releasing on Netflix!

This movie saw Dhanush making a special appearance. His character of Kokki Kumar from Pudhupettai became so popular that it was briefly brought up in a guest role in Aishwarya Dhanush-directed action-comedy. Watch Dhanush's entry scene below.

That's it, guys! These are some of the South films that saw Dhanush playing a gangster. His next is Jagame Thandhiram that has high expectations attached to it and so let us how well it fares. Stay tuned!

(The above story first appeared on LatestLY on Jun 17, 2021 02:58 PM IST. For more news and updates on politics, world, sports, entertainment and lifestyle, log on to our website latestly.com).