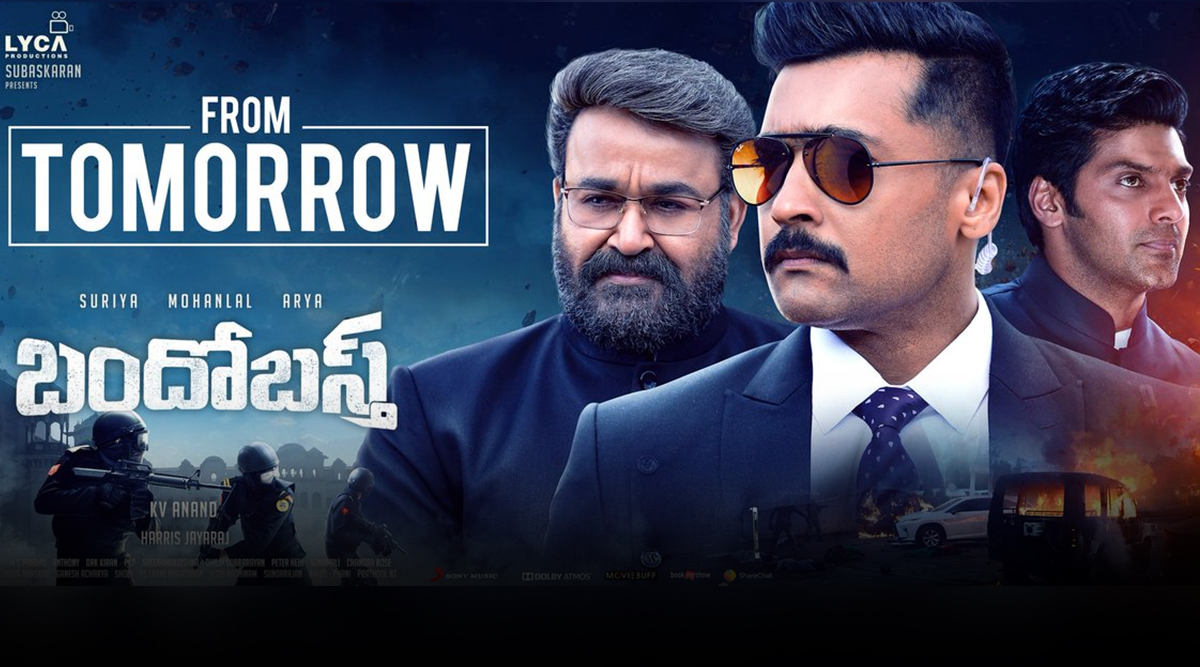 Kaappaan starring Mohanlal, Suriya, Arya and Sayyeshaa in the lead is all set to be released tomorrow, September 20. The Telugu dubbed version Bandobast would be also be releasing on the same day. The excitement amongst fans to watch the action thriller is sky-high, especially to see Suriya and Mohanlal sharing screen space. Fans are trending on Twitter using the hashtags #KaappanFromTomorrow and #KaappaanFromSep20. Kaappaan Plagiarism Case: Madras HC Dismisses Charges Filed Against Suriya-Mohanlal Starrer, Movie to Release on September 20.

Kaappaan is produced under the banner of Lyca Productions. The film’s teaser and trailer have already grabbed eyeballs. Although it did not reveal much about the story-line, it did give a glimpse of the exotic locales where the film has being shot. Kaappaan has been filmed at locations such as New York, Brazil, New Delhi and Hyderabad. This movie marks the return of Mohanlal to Kollywood almost after a gap of five years. It also marks the debut of Bollywood actor Boman Irani in Tamil industry. Let’s take a look at what fans have to say about the film directed by KV Anand. Kaappaan New Trailer: Suriya is Ready to Boggle your Minds with this Action Extravaganza (Watch Video).

#Kaappaan will be releasing in 650+ screens, currently highest number of screens for a @Suriya_offl film. https://t.co/RUWO1rSbNa

A non-rajini record release in Singapore 👌🏾👌🏾

The Cut-Outs Are Up

About Kaappaan Mohanlal said, “Kaappaan is a well-made film. It is not only about action, but also relationships. It depicts a beautiful relationship between the Prime Minister and a SPG officer,” reports The New Indian Express. Suriya would be seen playing the role of a high-ranking security officer whereas Mohanlal is portraying the role of Prime Minister Chandrakanth Varma. Stay tuned for further updates from showbiz industry!