Kho Kho is a Malayalam sports drama written and directed by Rahul Riji Nair. The movie stars Rajisha Vijayan in the lead and had released in theatres on April 14. Kho-Kho is streaming now on Amazon Prime Video. 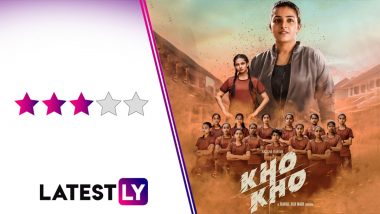 Kho-Kho Movie Review: There is a problem when it comes to sports dramas made in India that comes with a tendency to stick to a particular template. For the sake of populist understanding, let's call it the Chak De India syndrome. Many big sports movies like Dangal, Gold and Bigil have been prone to this syndrome. Rajisha Vijayan's new Malayalam movie, Kho Kho, is no different. And yet like the other movies that I mentioned earlier, Kho Kho still manages to stand out in its genre by using this 'syndrome' to its entire advantage and crafting a heartwarming narrative of human spirit and women empowerment. Love Movie Ending Explained: Decoding the Confusing, Complicated Climax of Shine Tom Chacko, Rajisha Vijayan’s Malayalam Film on Netflix.

Maria (Rajisha Vijayan) gets a posting in an all-girls school in sleepy island-village called Perunthuruthu as a PT instructor there. A former sportsperson herself, Maria lost her chance to get into the national team due to a scandal in her family. Now in some very aspiring girls at her new school, Maria sees an opportunity to relive her dream through them at the game they like to play the most - Kho Kho.

In Kho Kho, I have seen the most heartening bunch of sports aspirants since, well, Chak De India. While the movie still kind of sticks to the CDI format, what works here is how its flips at the trope in a manner that can only be described as heartwarming.

Like with Kabir Khan, Maria is initially rough with the girls when she begins training with them. But once the girls begin to rebel, she doesn't bully them further, instead she reaches out to them and talks to them in a pleasant way. Or like how the girls of Chak De... rally together to beat the shit out of perverts, here we have them come together to scold an abusive father of a teammate. Only in this case, they don't really need to rally together to be a team, they are already that. All they needed was to find direction to seek discover a world outsider their island, and Maria gives them a way out. Even the famous sattar minute talk is rehashed in a way in the climax that would surprise you in a nice way.

Kho Kho is what you can call a film that doesn't really want to waste your time in negativities. The red-tapism, the bureaucratical adverse elements that usually affect an underdog's journey to reach the top (see Rajisha's own Finals for that)  are mostly unseen (but not unheard). In an interesting bit of casting, the director Rahul Riji Nair himself plays the most antagonistic character of the lot, but even he is pretty harmless apart from snide remarks and jealous nature. Another scene has the headmaster insist on Maria that his daughter (who isn't fit enough) be part of the team, but even this nepotistic ploy is nicely used in the storyline, without making it sound callous. Even the treatment of Maria's husband (The Priest fame Venkitesh VP) is done is a way that lives up to the film's feel-good nature, though he comes across as difficult at first. Karnan Movie Review: Dhanush’s Versatility and Mari Selvaraj’s Brilliance Make an Epic Combo!

The real conflict arrives not from a person, but from an event, when Maria's past comes back to haunt not just her, but also the girl she bonds with the most - Anju (Mamitha Baiju), the team's captain. So instead of adding unnecessary external conflict, Rahul uses only the core characters of his movie to bring about both the good and the bad moments, leading to a great finish that while sticking to a template, still manages to deliver a couple of surprises and a flush of thrill.

The biggest strength of Kho Kho as a film is in its emotional sequences. The scenes between Maria and Anju, or Maria and her dead father (Vettukili Prakash), or even that one scene Maria has with Anju's father are what makes the film so effective to watch. Of course, the actors have a lot to do with it.

Rajisha Vijayan is going from strength to strength as an actress, and Kho Kho can be added to being one of her other fine performances. Since she is the biggest name in the cast, the film is perched comfortably on her shoulders and the actress effortlessly takes it to the finishing point in style. Mamitha Baiju, who we last saw in the terrific Operation Java, is a great talent to watch out for. Operation Java Movie Review: Yet Another Dope Thriller From Malayalam Cinema That Deserves Your Attention.

The rest of the girls in the Kho-Kho team are quite natural. The supporting cast consisting Vettukili Prakash, Renjit Shekar, PJ Unnikrishnan do well in their roles. Special mention has to be given for Ponnachan Perumbally who was excellent in the scene asking Maria to take his daughter back in the team.

Kho-Kho's screenplay may come across as too inspired, but the feel-good nature, the performances and the themes it want to push make it highly effective enough for us to cheer for the girls of Perunthuruthu. Kho-Kho is streaming now on Amazon Prime Video.

(The above story first appeared on LatestLY on Jun 05, 2021 05:35 PM IST. For more news and updates on politics, world, sports, entertainment and lifestyle, log on to our website latestly.com).