One Movie Twitter Review: Mammootty’s Political Thriller Gets a Thumbs Down From the Moviegoers

When it comes to Malayalam cinema, the name that comes to our mind first is superstar Mammootty. Talking on the same lines, the actor's latest release happens to be One that has hit the screens on March 26. Check out the Twitter review of the political thriller here. 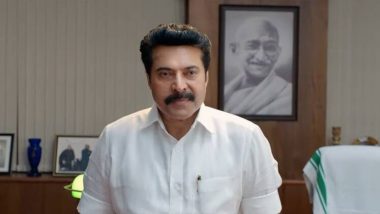 When it comes to Malayalam cinema, the name which comes to our mind first is superstar Mammootty. Talking on the same lines, the actor's latest release happens to be One that has hit the screens on March 26. Helmed by Santhosh Vishwanath, the film sees the actor essaying the role of Kerala's Chief Minister Kadakkal Chandran. Apart from the lead, the film also stars Murali Gopy, Siddique, Joju George, Nimisha Sajayan and Shanker Ramakrishnan in key roles. And well, the movie's early reviews are out and this can't be true. Kaadan Review: Rana Daggubati's Performance Gets Unanimously Hailed While The Film Disappoints Critics.

As going by the reviews on Twitter, Mammootty's One movie is a total disappointment. Yes, you read that right. While the star's performance has been lauded in the flick, the premise and other elements have been given a thumbs down by the moviegoers. Frankly, the script seems the main culprit. Here, check out some Twitter reactions below. Saina Review: Parineeti Chopra As the Badminton Champ Saina Nehwal Wins Critics' Approval!

#One Average reports for first half . Nothing impressive so far . Bobby Sanjay failed to create a strong script for first half . Hoping movie will be on track with second half and climax 🤞#Mammootty

#One is a badly written & utopian (a)political propaganda with Mammootty being the only saving grace -- as an ideal Chief Minister without any greys or oppprtunism akin to Mahaabali. A textbook example of intentions alone won't count. Tread at your own risk!

The best thing about #OneMovie is Murali Gopy. His character is a worthy successor to the character played by Murali in #TheKing. As for the rest...

A cakewalk role for @mammukka .

Well, after going through the above reviews, we feel, it's better if you don't watch the movie on the big screens. But if you happen to be a huge fan of Mammootty, then definitely go for it, as he is the only best part of the film. Have you watched One already? Tell us your view about the film in the comment section below.

(The above story first appeared on LatestLY on Mar 26, 2021 07:37 PM IST. For more news and updates on politics, world, sports, entertainment and lifestyle, log on to our website latestly.com).