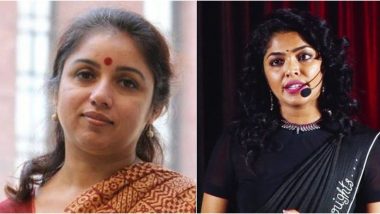 The trial of Kerala actress assault case is being held in a special court in Kochi and in a recent development, two witnesses are now reported to have changed their statements given earlier to the police. As per reports, actor Siddique and Bhamaa have made statements in court which are contradictory to the ones initially given to the investigation officers. Reacting to the same, WCC (Women in Cinema Collective of Malayalam industry) members and actresses Revathy and Rima Kallingal took to social media to react to the shocking turn of events and expressed their disappointment over Siddiqui and Bhamaa's witness statements. Malayalam Actress Sexual Assault Case: AMMA Could Have Split on Dileep Issue, Says Superstar Mohanlal.

Taking to Facebook, actress Revathy wrote, "It’s sad that we can’t trust our own colleagues in the film industry. So many years of work, so many projects, but when there is an issue for a ‘woman’ it all takes a back seat. There is no memory of all that friendship and shared work space. In the famous but not spoken much about these days, the Actress Assault case of 2017, Edavela Babu and Bindu Panniker pulled back on their own statements in court, well could not have expected much from them. And now its Mr Siddique and Bhamaa." The actress expressed shock and disappointment over the same and also made sure to clarify her stand as she signed off saying, "Just to remind that the people who were with HER and still with HER."

It’s sad that we can’t trust our own colleagues in the film industry. So many years of work, so many projects, but when...

Deeply hurt that colleagues who stood by the survivor have turned hostile in the last minute when she needed...

Also, actress Rima Kallingal reacting to the recent development in the case said, "Deeply hurt that colleagues who stood by the survivor have turned hostile in the last minute when she needed their help the most. As much as we know that the women who have turned hostile are also victims in some sense who have no place in the power equation of this industry, even then, it hurts the most." Malayalam Actress Assault Case: Supreme Court Adjourns Plea of Actor Dileep.

For the uninitiated, the case pertains to the abduction and sexual assault of famed Malayalam actress in 2017. Actor Dileep has been among the main accused in the case.

(The above story first appeared on LatestLY on Sep 18, 2020 08:14 PM IST. For more news and updates on politics, world, sports, entertainment and lifestyle, log on to our website latestly.com).