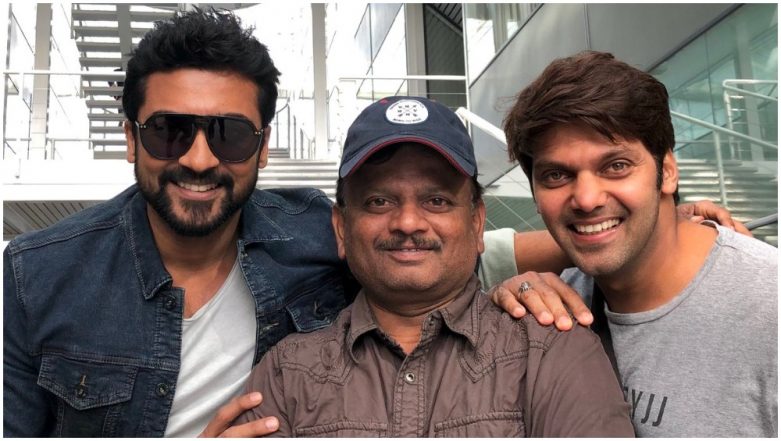 Suriya Sivakumar's 37th film is getting bigger by the day. The movie is directed by cinematographer-turned-filmmaker KV Anand, who previously worked with Suriya in Ayan and Maatran. The project is becoming quite exciting for the fans thanks to the quality of the cast it is inviting. We first reported about how Malayalam superstar Mohanlal has agreed to be a part of the movie, followed by Shivaay and Junga actress Sayyeshaa who is the female lead. Telugu star Allu Sirish and Bollywood star Boman Irani are also part of the film. Now popular Tamil star Arya has been roped in to play an important role in the film.

The director himself confirmed the news, when he shared a picture of Arya with himself and Suriya on Twitter. If you remember, Suriya had a cameo in Avan Ivan that has Arya in the lead (along with Vishal). This is quite an exciting development for the fans of both the stars and we wonder how interesting the role of Arya's would be, since Tamil stars generally avoid multi-starrers. Arya was last seen in a cameo role in this year's Iruttu Araiyil Murattu Kuththu, will also be seen as the lead in Santhana Devan and Ghajinikanth.

KV Anand has himself scripted Suriya's 37th movie along with novelist Pattukottai Prabhakar, while Harris Jayaraj is the music composer.