Thambi is a Jeethu Joseph directorial that released today, December 20. It featured Karthi and Jyothika in the lead, who teamed up for the first time for a film. It is produced under the banner of Viacom 18 along with Parallel Mind Productions. 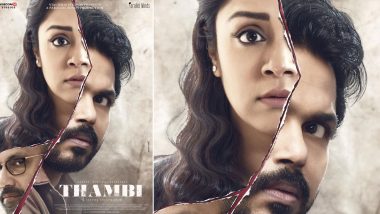 Thambi (which means younger brother) is a Jeethu Joseph directorial that released today, December 20. It featured Karthi and Jyothika in the lead, who teamed up for the first time for a film. The film’s director Jeethu is known to helm engaging thrillers and comedy flicks. He has directed movies such as Detective, My Boss, Drishyam, Papanasam, The Body, and many others. So when it came Thambi, many could figure the kind of blend that this Tamil movie could have. Well, Thambi has opened to positive reviews. From its engaging plot to intriguing performances put forth by the star cast, critics and fans have labelled this film as a feel-good family drama. Thambi First Look: Karthi and Jyothika's Film With Jeethu Joseph Gets a Title, Teaser Date OUT.

Thambi revolves around a sister named Parvathi who is waiting for her brother Saravanan who ran away home years ago. The entire family hopes that miracle would happen and one fine day Saravanan would return home. But things a turn when they come across Vicky, who looks exactly like Saravanan. Well, movie buffs have loved the fact how Jeethu Joseph could keep everyone at the edge of their seats with some nail-biting suspense. Let’s take a look at the reviews shared by critics and fans on Twitter. Jyothika and Karthi’s Yet-to-Be-Titled Film Goes on Floors Today.

#Thambi - An interesting and excellent thriller which engaged throughout the movie with a nice family sentimental sequence. #JithuJoseph yet again scored in his area.

#Thambi - 3.5 /5. @Karthi_Offl's dream run will continue. After #Kaithi, this ought to be another Hit for him, in a totally different genre. He's in fine form

Welcome return to Kollywood for #JeethuJoseph after Papanasam. Some Drishyam flavour is there here too😊👌

#Thambi [3.5/5] : An unpredictable thriller set in a family backdrop.. Twists and turns keep u engrossed.. @Karthi_Offl is fantastic.. He is the lifeline of the movie.. #Jyotika has done well.. #Sathyaraj another seasoned performance.. @Nikhilavimal1 in a pleasant role

A Must Watch Film

#Thambi: Twists, turns and truths. A superb family drama that sets up the scenario well in the first half and surprises you at many places in the second. Jeethu Joseph succeeds with another very good film in his exclusive style. Don't miss it!

#Thambi: Humour + Thriller! @Karthi_Offl - #Jo - #Sathiyaraj Trio works out really well! It will be a good outing for families.. Go for it! pic.twitter.com/gILbYfFS1L

Watch The Trailer Of Thambi Below:

Thambi was produced under the banner of Viacom 18 along with Parallel Mind Productions. Rensil D'Silva and Sameer Arora have penned down the story. The film’s music has been composed by Govind Vasantha. Stay tuned for more updates from the world of entertainment.

(The above story first appeared on LatestLY on Dec 20, 2019 04:24 PM IST. For more news and updates on politics, world, sports, entertainment and lifestyle, log on to our website latestly.com).