Triples is an eight-episode web-series that is presented by Karthik Subbaraj and directed by Charukesh Sekar. The series stars Jai Sampath, Vivek Prasanna, Rajkumar, Vani Bhojan and Madhuri. Triples is streaming on Disney+ Hotstar. 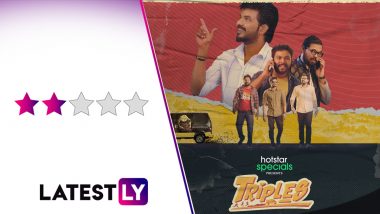 Triples Review: Anything that has the maverick Karthik Subbaraj's name associated with it is bound to raise our curiosity. Which is also the case with the new Hotstar series, Triples, a major one in Tamil. Starring Jai of Goa and Raja Rani fame, the comedy series deals with humour, friendship and romance in a very viewer-friendly manner. Subbaraj had presented the series, which is directed by debutant Charukesh Sekar, and lasts eight episodes. Triples Trailer: Jai Sampath, Vivek Prasanna and Rajkumar’s Antics Offer a Hilarious Ride.

The thing is, Triples feels less in Subbaraj's territory and more in Jai's fave filmmaker Venkat Prabhu's comfort zone with its breezy light-hearted treatment and madcap antics. Triples revolves around three friends - Ram (Jai), Maadhu (Vivek Prasanna) and Cheenu (Rajkumar) are three friends who own a cafe in a corporate building. When we meet them first (after an intriguing if now contrite prologue), Ram is getting married to Mythili (Madhuri), with his friends in attendance.

The twist arrives when Meera (Vani Bhojan, very confident), his ex-wife arrives at what turns out to be Ram's second wedding and she has a secret that she needs to share with him.

The series initially is about the friends' funny attempts trying to save Ram's new wedding, and then later, after learning Meera's secret, trying to sabotage it without creating suspicions. We are also shown the love story of Ram and Meera, and how it fell apart after their marriage. While Ram's incessant stalking of an initially disinterested Meera is problematic in retrospect, the romantic portions still feel the better part of the series. That said, the reasons why they break up also makes us feel less sympathetic towards our hero.

The comic sequences, however, stick to sequences that we have seen before and mostly rely on the actors' comic timing to make some effect. Thankfully, the cast roped in for the series have some awesome comic timing, making even silly sequences look somewhat amusing. Like that scene where the three friends try to pull off an impromptu dance performance at a wedding.

While Jai is his usual self, it is Vivek Prasanna who often steals the show getting the more humorous scenes. It also helps that he has a fine compadre in Namita Krishnamurthy, another absolute scene-stealer, who plays his wife. Rajkumar's perpetually stunned look has some good use here, though he doesn't get much to do character-wise. Jai Sampath Birthday: From Chennai 600028 to Jarugandi, Here Are The 5 Movies Of This Tamil Actor That You Must Watch!

They also benefit from the occasionally witty lines and scenes (the wedding hashtag is a rare moment of hilarious brilliance). Things go downhill, when the series soon begins to turn into a Priyadarshan film. We have the Triples' employee who runs off with their money while eloping with his girlfriend to Goa, while her powerful father is now after these friends. Also, the stolen money was supposed to be repayment of a loan taken from a notorious loan-shark Baby Chetta (Manikandan R Achari), who sends his men after them. And perhaps as a tribute to its lead hero's most popular, everyone heads off to Goa for the latter part of the series.

The situations strongly begin to give off deja vu feels, the humour feels lesser funnier by now, and if it were not for the cast, Triples would have turned triple boring by then!

Triples is watchable for the comic chemistry between the main cast, and a couple of hilarious sequence. Otherwise, the new Tamil series is merely passable. All the eight episodes of Triples is streaming on Disney+ Hotstar.

(The above story first appeared on LatestLY on Dec 11, 2020 09:02 AM IST. For more news and updates on politics, world, sports, entertainment and lifestyle, log on to our website latestly.com).