Triples is an eight episode series that will begin streaming on on Disney+ Hotstar VIP from December 11. Starring Jai Sampath of Goa, Engaeyum Eppothum and Raja Rani fame, Triples is directed by Charukesh Sekar and written by Balaji Jayaraman. 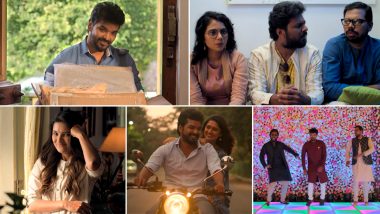 Vani Bhojan is the female lead. The trailer of Triples has dropped in and it promises some fun moments, enough romance and comedy. Most of the actors in the show are known for their comic skills, with Jai shining well whenever he is cast in a Venkat Prabhu film, the Chennai 600028 films and Goa being prime examples. Vivek Prasanna was so good in Meyatha Maan, while who can forget Rajkumar's hilarious performance as an actor in Sethupathi? Which is why Triples looks promising. Mookuthi Amman Movie Review: Nayanthara Makes a Striking Goddess, Urvashi an Absolute Scene-Stealer in RJ Balaji’s Social Entertainer.

Triples is an eight episode series that will begin streaming on on Disney+ Hotstar VIP from December 11. So how did you find the trailer? Share your thoughts in the comments section below.

(The above story first appeared on LatestLY on Nov 30, 2020 09:26 PM IST. For more news and updates on politics, world, sports, entertainment and lifestyle, log on to our website latestly.com).