The trailer boasts of some really picturesque locations with shots of the beautiful sea. The film will be releasing in theatres and we think not only story-wise but it would be visually appealing as well. 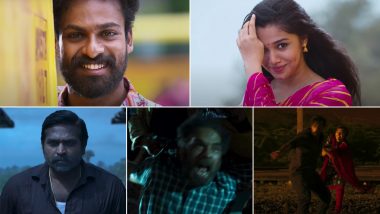 2021 kickstarted with a number of amazing films being announced for release in theatres and online. The makers of Panja Vaisshnav Tej, Krithi Shetty and Vijay Sethupathi starrer Uppena also gave the audience a sneak peek of the story by sharing a thrilling teaser of the film on Makar Sankranti last month. With the teaser, it was already established that Panja Vaisshnav Tej and Krithi Shetty will be seen romancing each other, But now with the trailer also out today, we finally even meet the villain of their love story who is none other than Vijay Sethupathui. Uppena Teaser: Panja Vaisshnav Tej and Krithi Shetty’s Romance Is the Highlight of This Buchi Babu Sana's Film.

The trailer begins with the introduction of Panja Vaisshnav's character who is in admiration of the idea of being in love. He the spots one of the most beautiful girl in the world (Krithi) and falls in love with her. Following scenes show some cute moments that the couple shares together until Vijay Sethupathi enters their life. Vija, who is Krithi's father, disapproves of the relationship and creates chaos in Tej's life. Krithi is seen fighting for her love but will she succeed? That's something we will get to see in the film.

The trailer boasts of some really picturesque locations with shots of the beautiful sea. The film will be releasing in theatres and we think not only story-wise but it would be visually appealing as well. Tej and Krthi chemistry is intriguing and after seeing the trailer, we are sure the fans cannot wait to see the pair on the big screen. Vijay Sethupathi Birthday: Laabam, Uppena, Navarasa – Upcoming Films and Shows of the Superstar to Look Forward to.

Uppena also marks the debut of filmmaker Buchi Babu Sana and going by the trailer, we think he has done a great job. The music for the film is done by DSP / Devi Sri Prasad while the film is being presented by Sukumar. Produced by Naveen Yerneni, and Y Ravi Shankar under Mythri Movie Makers & Sukumar Writings banners, Uppena was supposed to release last year but got postponed due to the deadly coronavirus pandemic. The film will now make it to theatres on February 12, 2021.

(The above story first appeared on LatestLY on Feb 04, 2021 05:52 PM IST. For more news and updates on politics, world, sports, entertainment and lifestyle, log on to our website latestly.com).