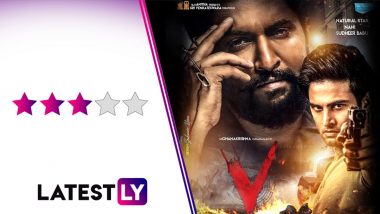 V Movie Review: With all respect to the makers of the film and their decision to release it on Amazon Prime directly, I really wish I could have seen V on the big screen. Of course, the situation in which V ditching theatrical release is something I can empathise with. But the thriller is so gorgeously and stylishly shot, courtesy PG Vinda's cinematography,  with some sleek action sequences and its two leading men - Nani and Sudheer Babu - both in rollicking form, V could have been a big-screen treat. It is also special for being Nani's 25th film, and he is a complete scene-stealer here. Baby Touch Me Now Song From V: Sudheer Babu and Nivetha Thomas Pull Off Killer Moves in This Peppy Club Number.

V is a thriller about a cop chasing someone who could be a potential psychopathic serial killer. We meet the suave police officer Aditya (Sudheer Babu), who is the hero of a recently controlled riot situation in Hyderabad. On the night of his felicitation ceremony, a colleague of his is brutally killed by a mysterious man.

The killer, who later identifies himself as 'V' (Nani) has left a note on the dead body that turns out to be a taunting clue for Aditya. Later, V calls him up and challenges him that he would be leaving more clues. Also, he would be killing four more people. If Aditya doesn't catch him before his fifth kill, then he has to return his medals and also resign from the job. A challenge that Aditya accepts.

Who is V and what's his murderous grudge against Aditya? Is he to Aditya, as the Joker is to Batman? Mohana Krishna Indraganti's thriller answers these questions and more in its slightly excessive 141 minute runtime.

Watch The Trailer of V:

V is worth watching for two main reasons. Indraganti (of Grahanam fame) has slickly directed the whole affair, making every visual look so polished. The movie has been shot at various locales in the country, and even abroad, with each place adding its unique charm to the visuals. V: Sudheer Babu Says His Upcoming Film Is Not Just About a Killer and a Cop.

Ravi Varma's direction of the action sequences are a treat to watch. Just sample the opening sequence, where Aditya takes on a gang of rioteers, and in the middle of the fight, his shirt goes off. Seeing the chiselled Sudheer Babu take on the goons with a finesse that would make even Salman Khan cheer for the scene.

The same goes for another fantastic fight scene between V and a Mumbai don's gang in their hideout. It is a brutal affair, with Nani delivering some cool moves. The direction and the action scenes make V a very watchable affair, even if the screenplay is, more or less, very uneven.

The cat-n-mouse game between Aditya and V, especially in the first half, is very engaging, with the cop often realising that he is being made the mouse here. The one little issue is the romantic subplot between Aditya and Apoorva (Nivetha Thomas), a girl who crushes over the cop but has some bizarre hobbies. The chemistry between the actors are good, and Nivetha looks a million bucks, but the subplot doesn't add much to the main premise.

Still, the first half is very engaging as we are curious to know if Nani's character is really as viciously mad as both the Joker and the Riddler combined. However, V later goes for a cliched route, giving a backstory to its supposed antagonist, one involving Aditi Rao Hydari's extended cameo, and then the film turns into a usual revenge saga. The portions also feel stretched here and some trimming could have helped.

Yet, the film continues to hold on to our interest and there is a big factor for that - the second reason what makes V an entertaining watch.

The man is on an absolutely scintillating form as the anti-hero here, chewing scenery, left, right and centre. He is on a roll in the action scenes, but he is even better when it comes to delivering the quips. I quite enjoyed his performance in the scenes where he mentally torments his unfortunate fellow passengers, after they unwittingly let out their casual outlook towards violence. Jersey Remake: Nani Believes the Story Needed a Bigger Audience, is Glad to See Shahid Kapoor Come On Board.

At one point, watching him revel in his grey shades, I was reminded of Ajith in Mankatha, another anti-hero performance I truly enjoyed. Pretty sure that Nani fans would relish this act of his.

Sudheer Babu's role may not be as crowd-pleasing as Nani, but the charismatic actor holds up well in all the scenes. His character could have been given a little more dynamo in the writing, but Sudheer fills the gaps with a confident performance. Among the supporting cast, Vennela Kishore as Aditya's colleague gets a couple of hilarious quips.

The music (Amit Trivedi) is okayish, though the songs are beautifully choreographed.

PS: I had a small chuckle when the opening credits of V began, and it mentioned Helo App as its partner. As you might be aware, Helo was one of the Chinese apps that were banned by the Indian government after China's incursion in Ladakh. How things had changed in merely a few months time!

As a thriller, V is a stylishly-directed saga with some terrific action sequences and thrilling (sometimes very brutal) moments. With Nani in powerhouse form and Sudheer Babu on charismatic mode, their fans can even forgive the movie's later inclination towards the tried-n-tested formula. V is streaming on Amazon Prime Video.

(The above story first appeared on LatestLY on Sep 05, 2020 04:34 AM IST. For more news and updates on politics, world, sports, entertainment and lifestyle, log on to our website latestly.com).