Vignesh Shivan shared a series of pictures of his mom and sister to wish them on Mother's Day. But when he posted his ladylove Nayanthara’s pic, it took the internet by storm. 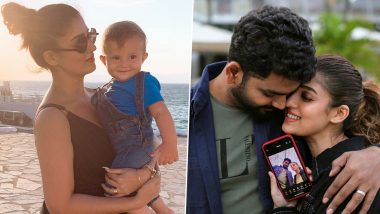 On the occasion of Mother’s Day, many social media users posted lovely pictures and messages for their moms. We also saw how some of them even wrote emotional notes for their mothers. Even director Vignesh Shivan, who is known for his works in the Tamil film industry, shared a series of pictures of his mom and sister to wish them on the special day. But when he posted his ladylove Nayanthara’s pic, it took the internet by storm, and there’s a major reason behind. Mother’s Day 2020: Allu Arjun, Kajal Aggarwal, Mahesh Babu Share Adorable Posts to Celebrate This Special Day! (View Pics).

The picture of Nayanthara that beau Vignesh Shivan decided to post was very unusual. She was seen holding a cutie pie in her arms and while sharing it on Instagram he captioned it as, “Happy Mother’s Day to the mother of the child in the hands of the mother of my future children ... #Happymothersday #mothersday #happymothersday”. This picture and those words were enough for fans of this lovely couple to go bonkers. If you haven’t seen the picture yet, you got to take a look at it now! Nayanthara and Vignesh Shivan’s ENGAGEMENT to Happen Soon?

Nayanthara With A Cute Little Munchkin

Vignesh Shivan and Nayanthara have never said anything about their love saga, but the duo often keep sharing some cheezy pictures on Instagram. Those pics only prove that these two are truly, madly, deeply in love with each other. There were rumours that Vignesh and Nayanthara are planning to take their relationship to the next level this year. However, the couple has neither agreed nor denied about such speculations.

(The above story first appeared on LatestLY on May 11, 2020 12:17 PM IST. For more news and updates on politics, world, sports, entertainment and lifestyle, log on to our website latestly.com).