Letting fans and viewers know that they’re back to entertain audiences once again, the actors and ALTBalaji shared some BTS pictures from the show and revealed the character looks of the protagonists. 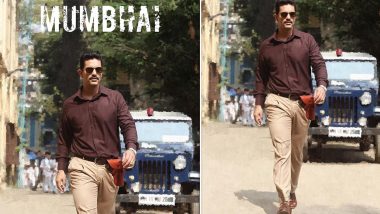 A majority of ALTBalaji and ZEE5 web shows have now resumed shooting. And today marked the resumption of the shoot of Mumbhai. Letting fans and viewers know that they’re back to entertain audiences once again, the actors and ALTBalaji shared some BTS pictures from the show and revealed the character looks of the protagonists. Actor Angad Bedi, who spearheads the team of Mumbhai shared his cop look and we must say, we are floored. MUMBhai: Angad Bedi Takes Tips From Real-Life Cops to Prep Up for His Role in Ekta Kapoor’s Web-Series.

Angad, who also had Gunjan Saxena: The Kargil Girl up for release next, had injured his knee while filming for an action sequence for MumBhai when he landed on his knee after miscalculating his action sequence. The injury worsened and he was eventually operated. MUMBhai: Angad Bedi to Play 90’s Encounter Specialist Daya Nayak in Ekta Kapoor’s Upcoming Show.

MumBhai features popular actor Angad Bedi playing the character of an encounter specialist along with Sikander Kher, who will portray the role of an underworld don. The story of the web series focuses on a cop's friendship with a gangster.

Angad Bedi’s look as a cop from the 90’s era is very dashing and stylish. On the other hand, Sikander Kher's look is very intense in the role of a gangster. One sees Sandeepa Dhar as well who plays a pivotal role in the show.

Check Out The Cast's Looks Below:

MumBhai, a crime drama will take a dive into the Mumbai underworld and the narrative will revolve around the friendship between a cop and a criminal, set in the milieu of Mumbai’s underbelly from the late 90s to early 2000.

(The above story first appeared on LatestLY on Jul 24, 2020 06:44 PM IST. For more news and updates on politics, world, sports, entertainment and lifestyle, log on to our website latestly.com).