After raiding comedienne Bharti Singh and husband Haarsh Limbachiyaa's house, they were issued summons to appear at the NCB office and have arrived there. 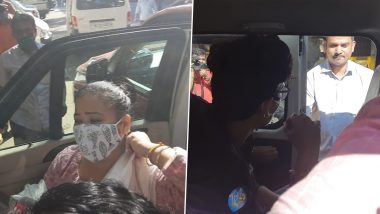 The Narcotics Control Bureau, on November 21, 2020 raided the Andheri abode of comedienne Bharti Singh and husband Haarsh Limbachiyaa. The raid took place in connection of the drug angle that the NCB has been proving, ever since the death of actor Sushant Singh Rajput in June. So far, Sushant's girlfriend, Rhea Chakraborty and brother Showik were arrested in the case. Drug Probe: NCB Conducts Raid At Bharti Singh And Haarsh Limbachiyaa’s Residence In Mumbai, Issues Summons To The Couple.

Later on, names of actors like Sara Ali Khan, Shraddha Kapoor, Rakul Preet Singh and Deepika Padukone along with her manager Karishma Prakash had emerged, after which they have been questioned by NCB. NCB even searched actor Arjun Rampal and girlfriend Gabriella Demetriades were summoned post which Arjun clarified that the medicine found at his residence was a prescribed one. TV Couple Abigail Pande and Sanam Johar Summoned For Questioning Again by the NCB.

From the television space, actress Abigail Pande and her choreographer beau Sanam Johar too were questioned by the NCB and their residence was also raided. Bharti and Haarsh were issued summons to appear at the NCB office and have arrived there. It is being reported that cannabis were recovered from Haarsh and Bharti's residence but no official confirmation of the same has been given. Sameer Wankhede, Zonal Director of NCB Office in Mumbai had earlier informed ANI, "She and her husband both have been detained for questioning by NCB about possession of narcotics substances,"

(The above story first appeared on LatestLY on Nov 21, 2020 03:33 PM IST. For more news and updates on politics, world, sports, entertainment and lifestyle, log on to our website latestly.com).