Bigg Boss 14 contestants Eijaz Khan and Pavitra Punia are literally the two darlings of the reality show. Right from showing love, passion, anger and whatnot, the pair has been entertaining the audience with their on and off chemistry. Recently, they were spotted hugging each other chup-chup ke. Read on. 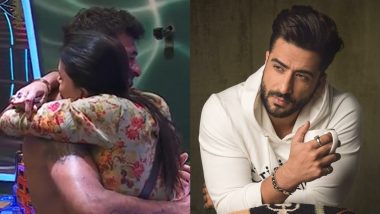 Bigg Boss 14 contestants Eijaz Khan and Pavitra Punia are literally the two darlings of the reality show. Right from showing love, passion, anger and whatnot, the pair has been entertaining the audience with their on and off chemistry. Even in the BB Adalat episode, we saw judge Farah Khan rooting for #PaviJaz (Pavitra Punia, Eijaz Khan) and also guiding them to be each other's support system on the show. That's not it, as on yesterday's episode we also saw the two hugging each other while Aly Goni accidentally makes an entry. Bigg Boss 14: Rahul Vaidya Proposes Girlfriend Disha Parmar For Marriage On National TV (Watch Video).

In the viral video, we can see Pavitra hugging a shirtless Eijaz near the bathroom area. However, Aly catches the two amid the moment and then runs to the living room and teases Punia of romancing with Khan. He also describes what he saw to the housemates and pulls Pavitra's leg. The clip is really the cutest as it's hard to see such moments on Bigg Boss. And we also love a blushing Punia! Bigg Boss 14 November 10 Episode: Farah Khan Schools Shardul Pandit, Aly Destroys Jasmin's Doll - 5 Highlights of BB 14.

@alygoni Caught Eijaz & Pavitra 😂 . . Follow @reality.gyaan to get all the updates related to BiggBoss🔥 . . NOTE - ALL THE IMAGES / VIDEOS SHOWN BELONGS TO THE RESPECTED OWNERS AND NOT ME . I AM NOT THE OWNER OF ANY CONTENT SHOWED ON THIS PAGE . . . Copyright Disclaimer under Section 107 of the copyright act 1976, allowance is made for fair use for purposes such as criticism, comment, news reporting, scholarship, and research. Fair use is a use permitted by copyright statute that might otherwise be infringing. Non-profit, educational or personal use tips the balance in favour of fair use. . . All Rights Reserved To - COLORS , VOOT , VIACOM 18 & ENDEMOL SHINE INDIA . . . #biggboss14 #biggboss2020 #biggboss #bb14 #rahulvaidya #nikkitamboli #jasminbhasin #pavitrapunia #alygoni #shardulpandit #kavitakaushik #nainasingh #nishantmalkani #eijazkhan #rubinadilaik #abhinavshukla #jaankumarsanu #sidharthshukla #shehnaazgill #salmankhan #colors #bollywood #india .

On tonight's (November 11) episode, fans will witness an emotional moment between Pavitra and Eijaz. It will so happen that to save Punia, Khan will destroy his dogs' photo frame which is very near and dear to him. Well, whatsoever, we are loving this #PaviJaz track inside the house. Stay tuned!

(The above story first appeared on LatestLY on Nov 11, 2020 01:17 PM IST. For more news and updates on politics, world, sports, entertainment and lifestyle, log on to our website latestly.com).