Bigg Boss 14: Kavita Kaushik's Husband Calls Abhinav Shukla An Alcoholic, Claims That She Has Called Cops On Him More than Once

Bigg Boss 14 contestants Kavita Kaushik and Rubina Dilaik's showdown right before the former staged a walkout from the show, saw Kavita threaten Rubina Dilaik that she will divulge some secrets about Abhinav Shukla. And now, KK's husband Ronnit Biswas has revealed those secrets. 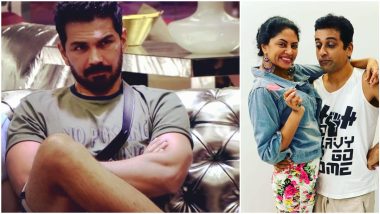 Bigg Boss 14 contestants Kavita Kaushik and Rubina Dilaik's showdown right before the former staged a walkout from the show, saw Kavita threaten Rubina Dilaik that she will divulge some secrets about Abhinav Shukla. Rubina being the sherni, the lady challenged Kavita to say whatever she wants to say. However, Kavita did no such thing ad walked out o the house. Bigg Boss 14 December 02 Episode: Jasmin Bhasin Has A Breakdown, Rubina Dilaik and Kavita Kaushik's Showdown Leads To the Latter Walking Out of BB14 - 6 Highlights Of BB14.

However, Kavita's husband Ronnit Biswas has now revealed what his wife did not on the show. Taking to Twitter, Ronnit revealed that Abhinav Shukla has an alcohol problem and that he has texted Kavita in an inebriated state more than once, which has prompted KK to call cops more than once. Bigg Boss 14 December 03 Synopsis: Rubina Dilaik Comes In Form, Takes Panga With All Housemates.

Well let me put the truth out there.. the not so gentleman we’re talking about has a severe alcohol problem and used to get pissed drunk and message KK through the night wanting to talk and meet up at all odd hours. So much so that she had to call the cops on him more than once

He also revealed how Abhinav begged them to give their house to shoot for some short film.

This is the same guy who literally begged us to give him our house for a film he wanted to make.the same film which we did for free & gave our house coz he couldn’t shoot at his own place coz of obvious reasons!aur ab yeh bol raha hai ussi lady ko ki maarega usko? Mard? Really??

Kavita and Rubina were earlier great friends in the house but their equation changed once Kavita re-entered the house. She grew close to Nikki Tamboli and differences between herself and Rubina - Abhinav began to grow with each passing day.

(The above story first appeared on LatestLY on Dec 03, 2020 09:39 PM IST. For more news and updates on politics, world, sports, entertainment and lifestyle, log on to our website latestly.com).