Bigg Boss 14 November 12 Episode: Aly Goni Becomes the Next Captain, Splashes Water on Nikki Tamboli When She Refuses To Wake Up - 4 Highlights of BB14

Tonight's episode of Bigg Boss 14 sees the Disco Night captaincy task continue and the contestants fight tooth and nail to win the captaincy. However, this task sees a lot of new equations form and many old relationships break, as everyone wants to become the captain. 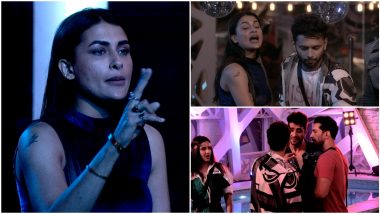 Tonight's episode of Bigg Boss 14 sees the Disco Night captaincy task continue and the contestants fight tooth and nail to win the captaincy. However, this task sees a lot of new equations form and many old relationships break, as everyone wants to become the captain. Singers Ajay, DJ Chetas, Shaan, Anu Malik and Neeti Mohan grace the BB14 contestants and entertain them, keeping up their spirits during the captaincy task. Check out the other highlights of tonight's Bigg Boss 14 episode. Bigg Boss 14 November 12 Synopsis: Aly Goni the New Mastermind of the House?.

Plans and Plots For Captaincy

The Disco Night captaincy task continues where Aly, Pavitra, Abhinav and other contestants keep making and breaking alliances to decide who will become the captain. Pavitra is hurt with Rahul for making alliances with Aly. Aly later on tried to talk to Pavitra into siding with him but she remains adamant that she will stand and fight for herself. This round sees the contestants eliminate Nikki Tamboli and Rahul Vaidya from the race. Bigg Boss 14 November 11 Episode: Shardul and Rubina's Nomination, Non-Stop Dance Party - 5 Highlights of BB 14.

Pavita and Eijaz play aankh micholi when Shaan renders his super hit "Chaand Sifarish" song. Eijaz and Pavitra keep looking in each other's eyes and we feel all the chemistry and sparks. This round sees Shardul give up and sit down, thus breaking the rule and eliminating himself. Pavitra follows suit and says that she choses to quit the task than be eliminated over majority. Abhinav walks off the task.

Aly Goni the Next Captain

After the next round sees Jasmin walk off the floor and Aly Goni is declared the next captain. Looks like all the planning and convincing worked in his favour.

Nikki continues to sleep and after Aly convincing her too many times and asking her to politely wake up, starts splashing water on her. Aly gives up and tells Bigg Boss that he can't physically force her to wake up. He tells the other housemates that he will now take Nikki's case. Hearing this, Nikki gets upset and says she will sleep as much as she wants. Aly later on calms Nikki down and says that he has always thought of her as a nice person.

In the next episode of the show, we'll see Nikki Tamboli throw some series allegations on Jaan Kumar Sanu - that of kissing her forcefully despite Nikki telling him to not do that. Jaan tells Nikki and then Aly that Nikki would always kiss him. The jails are brought

(The above story first appeared on LatestLY on Nov 13, 2020 12:10 AM IST. For more news and updates on politics, world, sports, entertainment and lifestyle, log on to our website latestly.com).