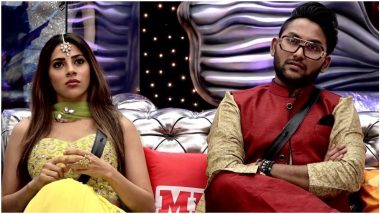 Bigg Boss 14 is going on in full swing and contestants are busy ganging up against each other. With Kavita Kaushik as the new captain of the house, housemates are certainly divided with the verdict. While Jasmin, Rubina, Aly are against her, Rahul and Nikki Tamboli have found a new confidant in her. With elimination barely a few hours away, we are excited and nervous to see who leaves the house this week. For more highlights and updates from tonight's episode, keep scrolling. Bigg Boss 14: Naina Singh Lashes Out At BB14 Makers, Says Her Eviction Was 'Pre-Planned' and 'Unfair'.

Salman asks Abhinav to play the game for him and not for Rubina. He makes him understand that in the process of helping his wife, he's in fact, making her look weak.

Eijaz and Nikki Give an Earful to Jaan

After Salman schools Jaan for being the only person inside the house who kept changing his sides as per his convenience, Eijaz and Nikki ask him to buckle up while also adding that they have been telling him the same thing but he never paid any heed to them.

Ekta initially asks contestants to name the housemates who they'd like to take revenge from. She also asks them to reveal their true selves in order to win a gem that would help them get immunity. They can use this immunity at any given point in the show. While Kavita names Aly and Jasmin, they too return the favours.

(The above story first appeared on LatestLY on Nov 21, 2020 11:08 PM IST. For more news and updates on politics, world, sports, entertainment and lifestyle, log on to our website latestly.com).