Ankita shared Dil Bechara's motion poster and reminisced his acting journey by captioning the photo - 'From #pavitrarishta to #dilbechara... One last time !!!' 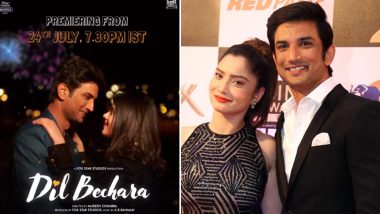 Actor Sushant Singh Rajput's death has not yet sunk in and here's another heartbreaker for the actor's fans. Sushant's last movie Dil Bechara has released online on Disney+ Hotstar and this has left his fans with mixed emotions. And while the entire world remembers the awesomeness that Sushant and his acting craft were and experiences it one last time, his ex-girlfriend Ankita Lokhande was also not far behind.  Ankita Lokhande Remembers Sushant SIngh Rajput, Says 'Keep Smiling Wherever You Are' (View Post).

The actress, who has chosen to not display her feelings on the actor's death on social media apart from a subtle anniversary post on July 14 (a month after Sushant's suicide on June 14) with a simple diya, went on to reveal to the world that she was indeed watching Dil Bechara as a tribute to Sushant. RIP Sushant Singh Rajput: Ankita Lokhande Remembers Late Actor a Month After His Demise, Lights a Lamp.

On July 22, when #CandleforSSR was trending on Twitter, for all those who wanted a CBI enquiry into his suicide, Ankita posted a photo with a lit diya at her place of worship at her home. Ankita and Sushant had dated when they were starred opposite each other in Pavitra Rishta. Unfortunately they broke up after dating for 6 years. Ankita also visited Sushant's father when he was in town for Sushant's last rites. In fact, Ankita even visited Sushant's house in Patna. Nevertheless, cheers to Sushant... one last time!

(The above story first appeared on LatestLY on Jul 24, 2020 09:20 PM IST. For more news and updates on politics, world, sports, entertainment and lifestyle, log on to our website latestly.com).