Netizens are waiting for the release of his last film, Dil Bechara. The Mukesh Chhabria directed movie is slated to stream on July 24, 2020 on Disney+ Hotstar 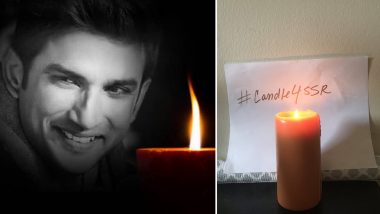 Bollywood actor Sushant Singh Rajput's demise has left a huge void in the industry. The talented star died by suicide on 14 June 2020 in his Bandra apartment, Mumbai. It has been over a month since this tragic incident but the fans and his dear ones are unable to process his passing away. His death also opened a bag of controversies including nepotism. Many of them demanded a CBI inquiry in his case. Now, MP Subramanian Swamy's lawyer who was appointed to look into the case, started an online peaceful protest for the late star called #Candle4SSR where the fans paid tribute by lighting candles. Ankita Lokhande Remembers Sushant SIngh Rajput, Says 'Keep Smiling Wherever You Are' (View Post).

Lawyer Ishkaran Singh Bhandari had urged fans to show support to 'Justice For Sushant' by joining this peaceful protest on social media at 8 pm on July 22. He asked everyone to post the pictures under this initiative. He wrote on Twitter, "It was decided by today during my Youtube Live that Tomorrow all those who want Justice for Sushant Singh Rajput will do peaceful protest & light candle,at 8 pm.#Candle4SSR - this hashtag (people decided) for tomorrow." The netizens flooded the social media with pictures of candles lit infront of Sushant's pictures. Check out some of them.

Silence speak very loudly but it is amazing how many people don't take the time to listen.#Candle4SSR pic.twitter.com/jFeNkswYmG

Ode To The Actor

Everyone stay together and fight for justice🙏⚖🙏

TOGETHER WE CAN AND WE WILL

SUSANT will be happy to see all his fan together fighting for justice. #JusticeforSSR#CBIEnquiryForSushant#ImmediateCBIForSSR#Candle4SSR

Hope you get justice....and an example is set that having money and power does not give you right to end someone's life and not be punished for it.#Candle4SSR @ishkarnBHANDARI pic.twitter.com/XDnzB7ofbW

We want a CBI ENQUIRY for Sushant.We want Justice. Something is Fishy in the whole case of Sushant Singh Rajput.

So shushant where ever u r u will always be remembered ❤️❤️#Candle4SSR pic.twitter.com/rwkEdt6sSo

Dear Photon, You will always remain in our ❤forever and ever. pic.twitter.com/zrTURECrV1

We miss you bro .Thankyou for giving us memories that we will always cherish. May this candle light dispel the darkness surrounding your sudden demise. The whole nation is with you in this endeavour for justice.#Candle4SSR @ishkarnBHANDARI pic.twitter.com/7nNBAnwPo5

Netizens are waiting for the release of his last film, Dil Bechara. The Mukesh Chhabria directed movie is slated to stream on July 24, 2020 on Disney+ Hotstar and can be viewed for free irrespective of any subscription.

(The above story first appeared on LatestLY on Jul 22, 2020 10:18 PM IST. For more news and updates on politics, world, sports, entertainment and lifestyle, log on to our website latestly.com).