Going by the winners' list Anushka Sharma produced Paatal Lok and The Family Man win big at the awards night. Sushmita Sen took the black lady home for Aarya while Jaideep Ahlawat won the best actor trophy for his performance in Paatal Lok. Check out the complete list of winners here. 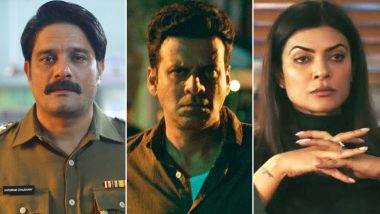 This year due to the coronavirus, entertainment saw a shift in the name of OTT platforms where moviegoers witnessed path-breaking content. To laud the excellence in the showbiz, a few days ago, Flyx Filmfare OTT Awards 2020 nominations list was announced online. And now, on December 19. 2020, the full winners' list is out! For the one's who aren't aware, Filmfare Awards is regarded to be the oldest as they've been honouring the deserving ones from cinema since 1953. FYI, series/shows released from August 1, 2019, to July 31, 2020, were only eligible here. Flyx Filmfare OTT Awards 2020: Tripti Dimri, Abhishek Bachchan, Jennifer Winget – Here’s The Complete List Of Nominations From Across 18 Categories!

Going by the winners' list Anushka Sharma produced Paatal Lok and The Family Man win big at the awards night. Actress Neena Gupta won the trophy for Panchayat, Raat Akeli Hai was the best web-original film, Sushmita Sen took the black lady home for Aarya and Jaideep Ahlawat won the Best Actor in a Drama Series (Male) trophy for his performance in Paatal Lok. Also, the red carpet of the night was graced by the who's who that includes Nora Fatehi, Sumeet Vyas, Zareen Khan, Rajkummar Rao, Amruta Khanvilkar and more. Year-Ender 2020: Paatal Lok, Scam 1992, Panchayat and More – 7 Web-Series We Loved the Most to Binge This Year (LatestLY Exclusive).

Here's the complete list of winners from Flyx Filmfare OTT Awards 2020 below:

Best Actor in a Supporting Role in a Drama Series (Male) - Amit Sadh, Breathe: Into The Shadows

Indeed, it looked like a fun night going by the glimpses on Filmfare's official Twitter handle. Meanwhile, we really loved this, as now digital is creating a buzz and is the new way to watch films/series/shows. Congratulations to all the winners from team LatestLY. Stay tuned!

(The above story first appeared on LatestLY on Dec 19, 2020 11:49 PM IST. For more news and updates on politics, world, sports, entertainment and lifestyle, log on to our website latestly.com).