Filmfare has listed out 18 different categories and the nominations for Flyx Filmfare OTT Awards 2020 are out! Tripti Dimri, Abhishek Bachchan, Jennifer Winget are some of the actors who have been featured in the nomination list. 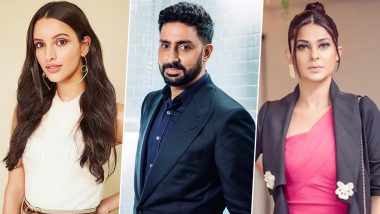 Filmfare Awards is a prestigious award ceremony and have been honouring excellence in cinema since 1953. It has honoured actors, films, technical crew and many others from the world of cinema. This time it has decided to honour OTT content. From the original series to the best shows and actors to series, Filmfare has listed out 18 different categories and the nominations for Flyx Filmfare OTT Awards 2020 are out! Tripti Dimri, Abhishek Bachchan, Jennifer Winget are some of the actors who have been featured in the nomination list. Anushka Sharma on Success of Her Netflix Film Bulbbul: 'We Always Wanted to Show Strong, Independent Women'.

Owing to the coronavirus pandemic, theatres had to be closed down and it was the OTT content that turned out to be a saviour for the audiences for entertainment. The OTT industry changed viewership pattern for the audience and now it plays a huge role. The voting for the Flyx Filmfare OTT Awards 2020 had started on November 23 and was concluded on December 11. Let’s take a look at the list of actors, actresses, series, original content, among other categories that have made it to the nominations list. Sushmita Sen in Aarya, Bobby Deol in Aashram, Abhishek Bachchan in Breathe Into The Shadows – List of Bollywood Celebs That Took the OTT Route for Comeback.

Abhishek Bachchan (Breathe Into The Shadows)

Nithya Menen (Breathe Into The Shadows)

Amit Sadh (Breathe Into The Shadows)

Hrishikesh Joshi (Breathe Into The Shadows)

Rahul Dev (Who's Your Daddy)

Shrikant Verma (Breathe Into The Shadows)

Trupti Khamkar (Hum Tum And Them... Bachchon Ke Side Effects)

Kenny Sebastian: The Most Interesting Person In The Room

So that’s the list of nominations for the Flyx Filmfare OTT Awards 2020! Let’s wait and watch who wins the Filmfare Black Lady!

(The above story first appeared on LatestLY on Dec 16, 2020 11:49 AM IST. For more news and updates on politics, world, sports, entertainment and lifestyle, log on to our website latestly.com).