Ishq Subhan Allah: Tunisha Sharma Opens Up On Replacement, Says 'I'll Miss Being a Part Of the Show, But Really Happy That Eisha is Returning'

Zee TV show Ishq Subhan Allah recently underwent a casting change with regards to its female lead. Actress Tunisha Sharma, who replaces Eisha Singh a few months ago, has once again been replaced by Eisha. 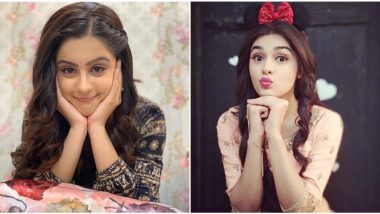 Zee TV show Ishq Subhan Allah recently underwent a casting change with regards to its female lead. Actress Tunisha Sharma, who replaces Eisha Singh a few months ago, has once again been replaced by Eisha. It can be recalled that Eisha and lead actor Adnan Khan’s on-screen chemistry was terrific and fans of the show and the pair were unhappy when Eisha walked out of the show. And now, Tunisha not only opened up on why she chose to quit the show, but also was praises for Eisha and Adnan and team Ishq Subhan Allah. Ishq Subhan Allah: Original Lead Eisha Singh Returns To The Show Once Again, Replaces Her Replacement Tunisha Sharma.

“Earlier, there was a lot of confusion around the resumption of shoots. Since there was no clarity, I couldn’t finalise a date to return to Mumbai from my hometown, Chandigarh. That apart, I have been forced to opt-out of ‘ISA’ due to some personal reasons. I conveyed my decision to the channel and the production house, and they were quite understanding about it,” Tunisha told Bombay Times. Ishq Subhan Allah Actor Adnan Khan Bids Co Star Eisha Singh Goodbye, Pens Heartfelt Note on Instagram (Watch Video).

Eisha, in her interview, had praised Tunisha’s work on Ishq Subhan Allah and had said that the actress had done a great job on the show. And Tunisha too, returned the sentiment and went on to say, “We don’t know each other personally, but I’ve always felt a connection with her. I want to wish her and the whole team good luck and a huge success for the show.” Ishq Subhan Allah's Lead Actor Adnan Khan Quits The Show (Deets Inside).

The actress also revealed that she had struck a great bond with male lead Adnan Khan and that she will miss him. All praises for the hottie, Tunisha said, “We became really good friends during my stint on the show. He is hard-working, positive, patient, supportive and overall, a very good co-actor. It was really great working with him and the ‘ISA’ team. Everybody was very loving and supportive. I will miss everybody and being on the set.”

“It was a great experience working with such lovely actors and technicians. I shall be forever grateful to the team for making me a part of ‘ISA’. Zara will always hold a special place in my career. Like every character, I learnt a lot from her, too. Initially, I was a bit reluctant to take up the show, as I always try to avoid replacing someone or join a daily soap midway. It’s always a daunting task to fit into someone else’s shoes. However, I think I did my job well and I am happy about the love that I received from the audience. I will miss being a part of the show, but I’m really happy that Eisha is returning to it since the fans really missed her,” concluded Tunisha.

(The above story first appeared on LatestLY on Jul 06, 2020 09:04 AM IST. For more news and updates on politics, world, sports, entertainment and lifestyle, log on to our website latestly.com).