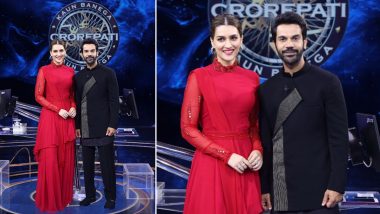 Actors Kriti Sanon and Rajkummar Rao will be seen as special guests on Kaun Banega Crorepati 13s Shaandaar Shukravaar episode. They will be on the hotseat playing the game for a social cause and interacting with the host Amitabh Bachchan. KBC 13: Sonu Nigam Recalls His Father’s Advice When He First Came to Mumbai.

Actress Kriti Sanon goes down on her knees for proposing to Amitabh Bachchan and it will be followed by a ballroom dancing. Moreover Rajkummar Rao will be seen impersonating actors such as Shah Rukh Khan and Sunny Deol on the show. KBC 13: Sholay Director Ramesh Sippy Reveals How Dream Cast of the Bollywood Classic Was Assembled.

He will also request the host to enact a few scenes from Amitabh's iconic movie Deewar. Kriti's sister Nupur Sanon will be sharing a special message. KBC 13s Friday special episode will air on October 29 on Sony Entertainment Television.

(The above story first appeared on LatestLY on Oct 25, 2021 07:21 PM IST. For more news and updates on politics, world, sports, entertainment and lifestyle, log on to our website latestly.com).