Loki Trailer: Black Widow Or Lady Loki? Fans Speculate The Identity Of The Mystery Lady Seen With Tom Hiddleston In This Scene!

Loki trailer dropped yesterday and fans got back to spinning theories. One of them was about the mysterious lady having a date with Loki beside a lake. Who is she - Black Widow or Lady Loki? While an overwhelming majority is convinced it's Lady Loki, many are wishing with all their hearts it's Natasha. 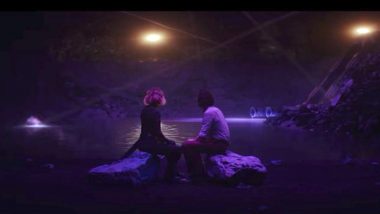 Loki trailer dropped yesterday and quite a few things made fans go crazy. One was the possibility of more than one Loki variant. That could be a possibility because they are fixing timelines twisted by Loki by visiting them. In case, you thought you will miss Loki and his brother Thor's bickering, Marvel Studios; found a fix for that too. They introduced Owen Wilson as Mobius from the agency that's arrested Loki for tampering with the timeline. Their banter is quite fascinating. But what left many with questions was that split-second scene of Loki sitting with a lady in some purple corner of the universe. Now fans are arguing over whether it's Black Widow or Lady Loki. Loki Trailer: Tom Hiddleston And Owen Wilson’s Sassy Buddy Banter Outshines The God Of Mischief’s Antics (Watch Video)

We all are aware that Sophia Di Martino is part of the Loki series on Disney+. Apparently, she is lady Loki here. If it's Natasha in Vomir, is it an illusion because our God of Mischief is quite a pro in concocting some. While we ponder over that, you check out what fans have to say...

That's the question and here're all the answers...

The #Loki series will air its next-to-last episode on the day #BlackWidow hits theaters on July 9. pic.twitter.com/gNT9oNXrOw

The heart wants what it wants...sorry it's brain here!

me @ my brain rn: this is obviously not Loki and Natasha but Loki and Lady Loki

Many fans are speculating that the lady shown in Loki trailer is Natasha, but its wrong... it’s actually Lady Loki played by Sophia D Martino #LokiSeries #Marvel #DisneyPlus pic.twitter.com/IJ8GLlMGwK

Aww...Black Widow will be here soon!

PEEPS SAYS THAT THIS IS LADY LOKI BUT FOR ME ITS NAT AAAA I RLLY MISS NATASHA 😭 https://t.co/b4R9Y5NSZv

Natasha or Lady Loki, for us, we will be fine with both. We are also sure Loki wouldn't mind either!

(The above story first appeared on LatestLY on Apr 06, 2021 04:53 PM IST. For more news and updates on politics, world, sports, entertainment and lifestyle, log on to our website latestly.com).