Álvaro Morte, Úrsula Corberó, Itziar Ituño-starrer Money Heist Season 5 Part 1 released on Netflix on September 3. Having said that, sadly the Spanish crime drama is the latest victim of piracy, as it has been leaked online for free watch and download. 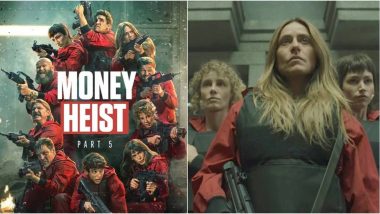 After a long wait, Money Heist Season 5 is finally out on Netflix across the globe. After four successful seasons, the last and final one will have 10 episodes. The story of the finale season will mark the end of the gang’s ongoing robbery at the Bank of Spain. Even the early reviews of the show are out and they look positive. However, unfortunately, within a few hours after its release on the streaming giant, Money Heist 5 has got leaked online. The series is now available for streaming on torrent sites. There's an HD print available of the show to watch online. Money Heist Season 5: Ahead of the Season’s Finale Premiere, Netizens Flood Twitter With Memes and Exciting Messages!

Money Heist Season 5 series in HD has been leaked on several torrent sites like Filmywap, Onlinemoviewatches, 123movies, 123movierulz, Filmyzilla, and other pirated versions of the series in HD (300MB free download in 1080p, 720p, HD online) are available for the audience to watch.

However, this is not the first time, a series has been leaked online for free watch. As almost every time before a movie or series is getting released in theatres or online, it has fallen prey to piracy. In the past, many strict actions are taken against these sites, but even after getting blocked, they bounce back promoting piracy. Well, a lot goes into making a series and these online leaks of popular series need severe action. Money Heist Season 5: Review, Cast, Plot, Trailer, Streaming Date and Time – All You Need To Know About Álvaro Morte, Úrsula Corberó’s Spanish Thriller Series.

Meanwhile, Money Heist Season 5 will release on the OTT platform in two parts. Volume one (consisting of 5 episodes) is out today (September 3) and volume two will stream in December this year. Not just the show, the cast of the series has also been popular and includes Álvaro Morte as The Professor, Nimri as Seirra, Úrsula Corberó as Tokyo, Itziar Ituño as Lisbon, Pedro Alonso as Berlin, Jaime Lorente as Denver, Hovik Keuchkerian as Bogota, Esther Acebo as Stockholm, Belén Cuesta as Manila, Rodrigo de la Serna as Palermo, Enrique Arce as Arturo, and Darko Peric as Helsinki. Stay tuned!

(The above story first appeared on LatestLY on Sep 03, 2021 03:55 PM IST. For more news and updates on politics, world, sports, entertainment and lifestyle, log on to our website latestly.com).