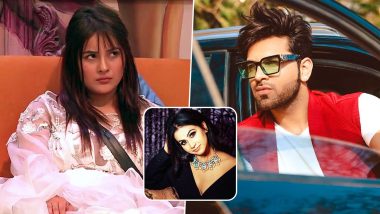 Well, it can be said that Shehnaaz Gill and Paras Chhabra's swayamvar show Mujhse Shaadi Karoge fell flat on its face and will soon be seen bidding the audience tada! Yes, launched with great expectations, considering that the show starred two of the most popular contestants of Bigg Boss 13, Paras Chhabra and Shehnaaz Gill, who by the way, seemed to be hung up on their BB13 partners Mahira Sharma and Sidharth Shukla respectively. In fact, while Paras talking about Mahira to his suitors on MSK did not go down well with the ladies who wanted to woo him, Shehnaaz had openly admitted that her feelings for Sidharth Shukla were the reason she couldn't give the boys of MSK the time of her day.  In a live session recently, Shehnaaz admitted that her love for Sidharth Shukla was one-sided. Mujhse Shaadi Karoge: Shehnaaz Gill Sheds Tears On The Show Because of This Contestant, Here's Why (Watch Video).

And looks like this impacted Gill's Mujhse Shaadi Karoge stint big time. Well, the show was all set to wrap up on March 27, 2020 as it is. However, the recent call to stop shooting for television shows, movies, ads and even OTT projects led to MSK shutting shop 10 days prior to the initial plan. And let us tell you that the end of the show that was supposed to run for 13 weeks (until May), was pretty dismal. Akanksha Puri Threatens Legal Action Against Ex-Boyfriend Paras Chhabra and Producers For Using Her Name on Mujhse Shaadi Karoge (Deets Inside).

After the decision to shut shoots immediately was announced, the makers of Mujhse Shaadi Karoge were asked to wrap up and the finale was shot, wherein Shehnaaz Gill was asked to leave the show and Paras Chhabra when asked to pick a name as his potential suitor, chose wildcard entrant Aanchal Khurana, who was then declared as the winner, a report in Bombay Times read.

What transpired that when Shehnaaz was asked to take her pick, she revealed that she did not succeed in making even a connection with even one of the boys. After her announcement, Shehnaaz was asked to leave the show. However, when Paras was given the chance, he chose Aanchal. Paras Chhabra Wants To Get Rid of His 'Akanksha' Tattoo On National Television, Reveals Plans to Remove Ex-Girlfriend's Name From His Wrist on Mujhse Shaadi Karoge.

Confirming the same, Aanchal told the daily, "When I signed the show, I was told that it will run till May 17. However, a few days ago, we were informed by a representative of the creative team that the show will shut down on March 27. We weren’t given a reason then. Yesterday, we were informed again that we will have to wrap up immediately as the whole industry has called for a shutdown. We shot the finale in an hour and left for our homes around 8 pm.” Mujhse Shaadi Karoge: Sidharth Shukla and Shehnaaz Gill Recreate Their Sizzling Chemistry As They Groove on 'Ve Maahi' (Watch Video).

Mujhse Shaadi Karoge had replaced Bigg Boss 13, and with Paras and Shehnaaz in the show, there were really high expectations from the show. However, while Paras' break up with his long term girlfriend Akanksha Puri while inside the BB13 house and subsequent liking of co-contestant Mahira Sharma seemed to throw the Splitsvilla 5 winner off his game, Shehnaaz Gill's very public and vocal feelings for BB13 winner Sidharth Shukla, came in the way of her choosing a suitor for herself on MSK, big time!!

(The above story first appeared on LatestLY on Mar 19, 2020 09:01 AM IST. For more news and updates on politics, world, sports, entertainment and lifestyle, log on to our website latestly.com).