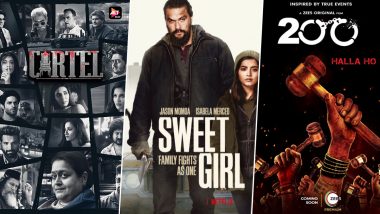 We are stepping on the third week of August 2021, and there are several exciting series and movies releasing on OTT platforms like Amazon Prime Video, ALTBalaji, SonyLIV, Netflix and ZEE5. Talking about the biggest release of the week, it would be Cartel, which is all set to stream on ALTBalaji and MX Player from August 20. Produced by Ekta Kapoor, the series revolves around the Angre family, the first family of Bombay and portrays the power struggle of the ancestry that keeps the entire city in check. The action-drama web series stars Rithvik Dhanjani, Pranati Rai Prakash, Divya Agarwal, Supriya Pathak, Tanuj Virwani and others. Cartel Trailer Out! Supriya Pathak, Rithvik Dhanjani, Tanuj Virwani's Powerful Crime Drama Releases on MX Gold on August 20 (Watch Video).

Another big release of the week would be Sweet Girl, which is all set to premiere on Netflix on August 20. Helmed by Brian Andrew Mendoza, the action-thriller flick is a story of a devastated husband who vows to bring justice to the people responsible for his wife's death, while protecting her daughter. The film stars Jason Momoa, Isabela Merced, Manuel Garcia-Rulfo, Adria Arjona, Amy Brenneman, among others. Another interesting release of the week would be 200 Halla Ho, which will drop on ZEE5 on August 20. The intense legal drama is based on a real incident, which portrays the story of women terrorised by a mobster who gang raped, robbed and murdered 300 families for 15 years until he met his enemy in a young Dalit girl. 200 Halla Ho Trailer: Rinku Rajguru, Barun Sobti, Amol Palekar’s Intense Legal Drama Raises Strong Voice Against Caste Oppression and Injustice (Watch Video).

(The above story first appeared on LatestLY on Aug 16, 2021 02:41 PM IST. For more news and updates on politics, world, sports, entertainment and lifestyle, log on to our website latestly.com).