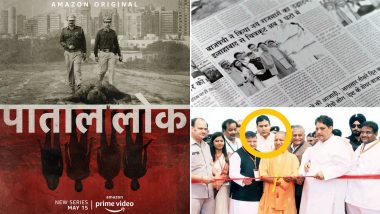 Paatal Lok series' producer, Anushka Sharma is once again in the legal soup. The Amazon Prime series has been a hit amid the crime drama lovers and the second season is awaited. However, a political scene in the series has got the makers into trouble. In latest development, BJP MLA, Nandkishore Gurjar, has filed a complaint against Anushka for using his picture without his permission. They morphed his picture alongside the other fictional characters from the show in a mock newspaper image. A case has been filed against the actress under National Security Act for instigating communal disharmony. Paatal Lok Gets Into Legal Soup For Using Casteist Slur Against Nepali Community In The Series.

In the reference, it is shown that Bajpayee, a politician who is shown in a negative light, inaugurates a highway. This picture is actually from a 2018  newspaper clip that originally has Uttar Pradesh CM Yogi Adityanath in 2018, with Gurjar alongside.

These Are The Pics

Not just that, the MLA has also accused the makers of maligning Bharatiya Janta Party's image. He further accuses that the show tried to portray a terrorism-free image of Pakistan and that show's content is 'anti-national.' He was also against the Paatal Lok showing castes in Sanatan Dharma in a bad light.

Earlier, the show was in the legal space due to a racist slur that was shown in one of the scenes, used against Nepali community. Anushka is yet to comment on the complaints filed against her.

(The above story first appeared on LatestLY on May 26, 2020 08:49 AM IST. For more news and updates on politics, world, sports, entertainment and lifestyle, log on to our website latestly.com).