Rucha Hasabnis celebrates her birthday today. On this occasion, we are about to take you on a journey that’ll be just about Rashi and only Rashi. From the iconic chana scene, saving Gopi from drowning to even her romantic dance with her onscreen husband Jigar, we have it all for Saath Nibhaana Saathiya fans. Check it out. 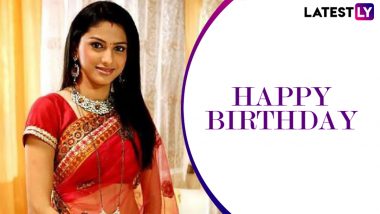 It was recently when Star Plus’ iconic show Saath Nibhaana Saathiya grabbed headlines when content creator Yashraj Mukhate churned ‘Rasode Mein Kaun Tha’ rap out of a scene from the serial. Now, you love or hate it, but because of the tune, Rashi, Gopi and Kokila’s name was all over the Internet once again. Case in point, Rucha Hasabnis aka Rashi Modi from the daily soap celebrates her birthday today (Feb 8). She played this cunning cousin/devrani of Gopi Bahu who was jealous of her. She plotted evil plans along with her mom Urmila to ruin Gopi’s life, but never succeeded in it. However, fans admired Rucha for playing a vicious character with a lot of conviction. Rucha Hasabnis aka 'Rashi' Finally Admits 'Woh Main Thi' After 'Rasode Mein Kaun Tha' Video Goes Viral! (View Post).

And on the occasion of her birthday today, we are about to take you on a journey that’ll be just about Rashi and only Rashi. From the iconic chana scene, saving Gopi from drowning to even her romantic dance with her onscreen husband Jigar, we have it all for SNS fans. So, let’s get started. Saath Nibhana Saathiya's Rucha Hasabnis And Husband Rahul Jagdale Welcome Their First Child (View Pic).

We never thought we will ever see this side of manipulative Rashi on the show, but she surprised us by seducing her hubby by dancing on ‘I Love You’ song. Hot and happening!!!

It was in the initial episodes of SNS when Rucha aka Rashi was her mother’s puppet and wanted to do all things ill to Gopi. But later on, we saw her being sensible and turning into Gopi’s saviour many times. And how can we forget this scene, when Rashi saved Gopi from drowning.

A preggers Rucha aka Rashi gets hurt while playing garba and Kokila Modi’s caring lecture is a must-see. As it's rare to see kagdi (that’s what Rashi used to call Kokila) uttering sweet words, right?

When Jigar accused Rashi of marring with him just for the sake of money things got ugly between the couple and it erupted into a high-voltage drama. Ultimately, both demanded a divorce. Watch.

Gopi had put chana in the cooker, but it was Rashi who emptied the vessel and created a story that it was Gopi’s absence mindedness that led to the exploding of the cooker when on the gas. Rashi was cunning but sadly got caught by Kokila.

That’s it, guys! These are some of the best moments of Rucha Hasabnis aka Rashi Modi straight from SNS. Recently when Rucha was quizzed about making a comeback on TV.  She had replied that she’s not keen on doing a typical family drama again.

FYI, Rucha got married to Rahul Jagdale in Hindu ceremony on January 26, 2015, and also was blessed with a baby girl in December 2019. Well, we hope she gets what she desires in 2021. Happy Birthday, Rucha Hasabnis. Stay tuned!

(The above story first appeared on LatestLY on Feb 08, 2021 09:40 AM IST. For more news and updates on politics, world, sports, entertainment and lifestyle, log on to our website latestly.com).