Satish Shah Reveals He Tested Positive for COVID-19 in July; Actor Thanks Hospital Staff After Recovering 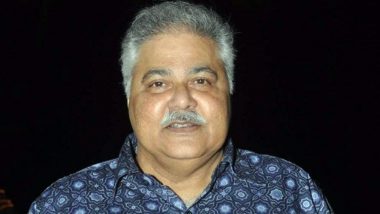 Veteran actor Satish Shah on Sunday revealed that he had tested positive for COVID-19 last month and thanked the medical staff for "restoring" his health back to normal. The 69-year-old actor, best known for his work on shows like "Sarabhai vs Sarabhai" and "Yeh Jo Hai Zindagi", was admitted to Lilavati Hospital on July 20 after he contracted the novel coronavirus. He was discharged on July 28. "I am absolutely well now. As per protocol, I have to quarantine myself till August 11. Natasha Suri, Former Miss India World and Actress, Tests Positive for COVID-19

I had developed fever which I suppressed by taking medicines. But then I was asked to get myself tested and the result turned out to be positive. I got admitted into the hospital immediately. "I would advise everyone to do that because they monitor you round-the-clock and you can avoid complications. There's nothing to be afraid of," Shah told PTI. Earlier in the day, the actor took to Twitter to thank the medical staff who nursed him back to health. Saath Nibhana Saathiya Actress Rucha Hasabnis’ Father Defeats COVID-19 But Is Still Fighting A Lung Ailment (View Post)

"#Lilawatihospital can't thank the angels in there enough for restoring my health back to normal. God bless u all (sic)" he wrote on the microblogging site.

Shah said he had planned to announce his COVID-19 diagnosis once his quarantine ended, but after actor Abhishek Bachchan he revealed he had tested negative for COVID-19 on Saturday, he was prompted to express gratitude towards the frontline workers. "You should not panic about COVID-19. It only creates complications if you have some health issues. In my case, it was mainly the age factor which made me cautious. But I am fine now by God's grace and would want people to remain positive," he added.

A graduate from the Film and Television Institute of India (FTII), Shah's career spans over four decades across TV and cinema.0 He is best known for his performances in films like Kundan Shah's cult classic "Jaane Bhi Do Yaaro", Sooraj Barjatya's family dramas "Hum Aapke Hain Koun…!", "Hum Saath Saath Hain" and Farah Khan's action-comedy "Main Hoon Na". His last screen appearance was the second season of the hit comedy show "Sarabhai vs Sarabhai", which premiered in 2017.