Recently, a Shehnaaz Gill fan mistook Sidharth Shukla's extended sabbatical from work for the actor not getting any work in the industry and asked him to seek out Shehnaaz Gill and ask her for help in getting work. 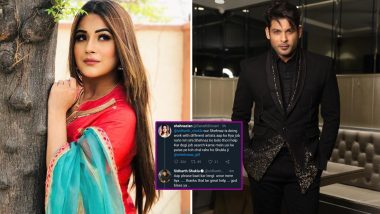 Bigg Boss 13 winner Sidharth Shukla was an established name in the industry before he rediscovered himself and his image in BB13. However, given the nationwide lockdown that ensued withing a fortnight of BB13 ending, a lot of projects that Sidharth was part of, had come to a grinding halt, apart from the music video that he did with Shehnaaz Gill. Sidharth had been enjoying some downtime and is waiting for shoots to resume so that his career can resume. Sidharth Shukla Bags The Male Lead Role In Ekta Kapoor's Broken But Beautiful Season 3? (Deets Inside).

However, a Shehnaaz Gill fan mistook Sidharth's extended sabbatical for the actor not getting any work in the industry and asked him to seek out Shehnaaz Gill and ask her for help in getting work. To this, Sidharth, known for his whacky and cheeky comebacks, told the fan to speak to Shehnaaz on his behalf. Shehnaaz Gill on Her Equation With Sidharth Shukla, Says ‘He Is Possessive Of Me But We Will Only Remain Friends'.

She deleted the post but don't worry I have the ss 😂🤣😂 pic.twitter.com/QpYHSVz887

Sidharth and Shehnaaz were one of the bestie Jodi's of Bigg Boss 13 and their fans have given them the moniker SidNaaz. Their chutzpah and fun banter was a hit with the masses.

(The above story first appeared on LatestLY on Jun 29, 2020 09:47 PM IST. For more news and updates on politics, world, sports, entertainment and lifestyle, log on to our website latestly.com).