Sunil Lahri Reacts To Son Krish Pathak Becoming an Internet Sensation, Says 'I Would Be Really Happy If He Becomes More Popular Than Me'

Sunil Lahri, who was quite the looker back in his younger days, has a son Krish Pathak, who has inherited his father's good look and has become the new internet obsession off lately. 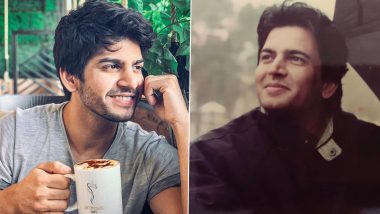 Ramanand Sagar's Ramayan originally aired in 1986 and actors Arun Govil, Deepika Chikhlia and Sunil Lahri became sensations in their own right back then. And now that Doordarshan decided to re-air Ramayan during the on-going lockdown, the actors once again became the talking point of the town. And while they continue to make it to the headlines every day, it was Sunil Lahri's son Krish Pathak, who has become the new internet obsession off lately. Ramayan Fame Sunil Lahri’s Son Krish Makes Fans Go Gaga Over His Handsomeness; Gets Tagged As Father’s Carbon Copy (View Pic).

Sunil Lahri, who was quite the looker back in his young days, has a son Krish Pathak, who has inherited his father's good looks. In fact, the good-looking youngster, who has already made his foray into acting with POW - Bandhi Yuddh Ke, is the next cute thing on the internet. Arun Govil and Sunil Lahri Look Strikingly Handsome in This BTS Picture From Their Ramayan Days and We Just Can't Stop Staring.

Reacting to his son's new-found stardom, Sunil Lahri was quoted in TOI as saying, "Beta hai... toh thodi baap ki jhalak toh hogi. My son is trying to get into films and webspace. He has received quite a few offers let's see what he accepts."

Bring in this summer with Daniel Wellington’s classic timepieces and their colourful NATO straps! Buy a watch and get any strap FREE ! Use my code ‘KRISH’ to get an additional 15% off! Also receive FREE shipping!Offer valid until 23rd April, 2018, hurry up and get your watches now! @danielwellington ! #DanielWellington #DWMumbai

Sunil also went on to reveal that his son does discuss potential work opportunities with him. "He consults with me a lot of times, but he belongs to this time so he knows better what he should do or what kind of work he should take up. Having said that if he gets stuck somewhere or gets confused he definitely asks me." Sunil Lahri Recalls A Prank From Ramayan Sets That Left Ramanand Sagar Extremely Livid (Watch Video).

But Sunil also believes that his son will have to make it on his own without his father's help. "He will have to do his own struggle because I feel in our profession more than personality and talent, destiny plays an important role to succeed in life. Only, time will tell where his destiny takes him. I just pray to God for his success like any other father. I would be really happy if he does good and becomes more popular than me in life," concludes Sunil.

(The above story first appeared on LatestLY on May 12, 2020 05:19 PM IST. For more news and updates on politics, world, sports, entertainment and lifestyle, log on to our website latestly.com).