The upcoming episode of Taarak Mehta Ka Ooltah Chashmah will see Gokuldhaam Society’s residents continue to grapple with coming to terms with the lockdown. 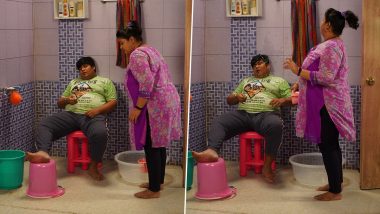 The upcoming episode of Taarak Mehta Ka Ooltah Chashmah will see Gokuldhaam Society’s residents continue to grapple with coming to terms with the lockdown. Jethalal and Sodhi are concerned about their businesses, Bhide is finding it tough to teach children online, Iyer, Popatlal and Taarak Mehta are uncomfortable with the idea of working from home. On the other hand, the Mahila Mandal’s household work has doubled with the spouses and children at home. Taarak Mehta Ka Ooltah Chashmah: Lockdown Restlessness Catches On To Gokuldhaam Society.

Everyone is so occupied with their own troubles that nobody has given a thought to what the children might be going through. Tapu Sena is badly missing their college fun, lectures, canteen, competitions and the little spats with friends. Tapu sena is confined to their homes and there is no escape from this which is making them remain completely glued to their phones. The lockdown thus leads to Goli beginning to binge-watch online programs so much that he has been foregoing his sleep. Taarak Mehta Ka Ooltah Chashmah Episode Update: Jethalal Absentmindedly Sanitizes Bread Along With Vegetables.

This leads to him napping off at odd hours and in weird places. One morning, after looking for him everywhere at home, Komal finds Goli napping on an inverted bucket in the bathroom, snoring away.

Komal’s attempts to wake him up but fail and as you would expect, eventually, she loses her cool and does something that will leave you in splits. And to find out the string of hilarious events that take place after this, watch Taarak Mehta Ka Ooltah Chashmah.

(The above story first appeared on LatestLY on Oct 15, 2020 02:16 PM IST. For more news and updates on politics, world, sports, entertainment and lifestyle, log on to our website latestly.com).