The Book of Boba Fett Episode 4 Review: Ming-Na Wen Shines in This Star Wars Spin-Off Outing That Has a Mandalorian Tease at the End! (LatestLY Exclusive)

The Book of Boba Fett is a Star Wars spin-off series on Disney+ and tells the tale of Boba Fett. It stars Temuera Morrison and Ming-Na Wen and streams every Wednesday on Disney+ Hotstar. 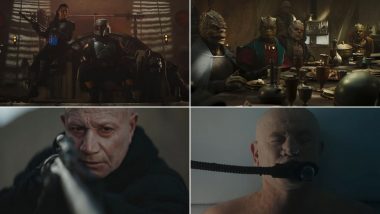 The Book of Boba Fett Episode 4 Review: After a lackluster episode last week, The Book of Boba Fett returns with an episode that is surely going to leave a bunch of fans happy. Episode three of The Book of Boba Fett felt a bit rushed and had some concepts introduced that felt more Robert Rodriguez than Star Wars. That’s not necessarily a bad thing, but it did cause some uproar, and while those concepts are present in this episode, they are there in a very minimal quantity. Overall, this was a solid hour of television. Also note, going forward we will be talking about spoilers, so if you haven’t watched this episode, come back and read this once you have. The Book of Boba Fett Episode 3 Review: Temuera Morrison’s Star Wars Spin-Off Delivers a Rushed Outing But Involves a Nice Little Cameo! (LatestLY Exclusive).

This episode heavily focuses on how Boba came across Fennec and how they both started working with each other. Again, I would say about 70 percent of the episode takes place in the past, which is a bit different from last week where the current time period took the center stage. I think the heavy focus on the past was a great advantage for this episode. Flashback’s finally end here and it looks like the plot is going to kick into full gear now.

The big strength of this episode was of course, the chemistry between Boba Fett and Fennec. I think developing Fennec’s character helped a lot considering she didn’t have much to do in the last few episodes. It was much needed and served well for the show. The best sequence here was perhaps Fennec and Boba working together so that they could get his ship. That was a really neat sequence and I loved watching that.

Another great sequence was when Boba and Fennec encounter the Sarlacc, and in what is one of the most tense sequences in the episode, Fennec has to try her best to launch the seismic charge. That sequence alone was worth tuning in for this episode. It was a great way to show why these characters trust each other so much.

Surprisingly enough, the actual conflict of the episode this time around felt like it had some meaning to it too. In the past few episodes it got a bit repetitive and the political nature of what was going on just didn’t pull me in. I was disappointed by that heavily, and I think here it came into full force. It felt like a buildup to something big, but the build-up this time was actually good.

Also the episode ends on a really good note. If the ending is anything to go by, then it feels like we will be seeing everyone’s favourite Mandalorian, Din Djarin drop by in the next few episodes to help Boba Fett fight.

While this episode definitely was an improvement over last week, I still have a hard time with the Mod looking gang. They just feel so far apart from Star Wars. Even the modder that Boba brings Fennec to, he looked like every rapper you see nowadays. I just didn’t vibe with it that much. It just feels something out of Spy Kids, which is another Robert Rodriguez production. But that was just a small part of this episode. Euphoria Season 2 Episode 2 Review: Zendaya’s HBO Show Delivers an Intense Episode With an Interesting Love Triangle at the Centre! (LatestLY Exclusive).

The Book of Boba Fett returns with a fun and cool episode that caps off the storyline in the flashbacks and moves forward with its central plot. It leaves us with a tease at the end that honestly has me excited to see whether Din Djarin will show up or not.

(The above story first appeared on LatestLY on Jan 19, 2022 04:54 PM IST. For more news and updates on politics, world, sports, entertainment and lifestyle, log on to our website latestly.com).