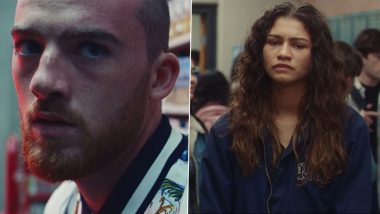 Euphoria Season 2 Episode 2 Review: With last week’s episode, I took issue with how there just wasn’t much that happened in the episode aside from the ending. It had all the makings of an intense and nail biting episode, but the basic plot of it lacked a lot of substance. Thankfully, the second episode of Euphoria Season Two picks it back up to pace although I do have some issues with Rue’s storyline here. Also note, going forward I will be talking about spoilers in this review, so read with caution or come back here after watching the episode. Euphoria Season 2 Review: Zendaya’s HBO Series Returns With a Tense But Surprisingly Shallow Episode! (LatestLY Exclusive).

So naturally, this episode deals with the aftermath of the last episode. After getting beaten up by Fez, Nate is taken to the hospital. It’s over there where he starts falling in love with Cassie and that’s the main plotline of our episode. Nate starts thinking about how he wants to start a family with Cassie and how he is so enamoured with her, and it just takes a very weird turn in general. Cassie also reciprocates with those feelings and you have these two sets of characters falling for each other. I think Jacob Elordi and Sydney Sweeney are the two best parts about this show right now.

With this development it also sets up something extremely interesting. Maddy wants to be in a relationship with Nate again and that complicates things for Cassie. Its twisted, its nail biting and honestly I am very excited about this part of the storyline now. Just the copious amount of mind games that it can lead to within the characters has me looking forward to the rest of the season.

Aside from that, Cal Jacobs is also back in the spotlight now. While trying to find out who put Nate in the hospital, he uses Lexi to get to Fez. The scene between them in the store was one of the most tense and anxiety inducing scenes I have seen in a while. Considering Cal had a gun on him to hurt Fez, it could have taken a turn for the worse, but the way it ended just made me breathe a huge sigh of relief. Euphoria Season 2: Zendaya Issues a Personal Note Ahead of the Show’s Release, Says ‘Watch It if You Feel Comfortable’.

While this episode was good, my major problem here lies with how Rue’s story is being handled. I am sure the writers have more planned for her, but right now she just feels like someone who is in the background. With the introduction of Elliot, the guy who Rue does drugs with and how it might complicate her and Jules’ relationship, I just want some more time devoted to them. But aside from that, this was a return to form for Euphoria.

After a mixed bag of a season premiere, Euphoria delivers an episode that is nail bitingly intense and does a great job at character development. With a love triangle now at the center of the show, I can’t wait to see the future episodes lead to.

(The above story first appeared on LatestLY on Jan 17, 2022 09:23 PM IST. For more news and updates on politics, world, sports, entertainment and lifestyle, log on to our website latestly.com).