The Umbrella Academy 2 Trailer: Netflix Isn't Done with Time Travelling Yet, Season 2 Will See the Superheroes Enter the 60s to Save the World (Watch Video)

Netflix is back with the new season of The Umbrella Academy and yes, it involves time travelling once again. 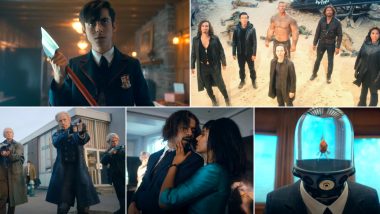 Are you among the ones who are still trying to relish the wonderful series that Dark was? Or probably hunting for other web series or movies that revolve around sci-fi genre? Well, guess your hunt is about to end for Netflix is back with season 2 of The Umbrella Academy. For a change, it's good to witness a bunch of superheroes that don't belong to Marvel and DC. They have a separate fan base who are eager to see what's lying in store for them next. Going by its newly released trailer, we'll see them travelling back in time to save the world from yet another apocalypse. The Umbrella Academy: Everything You Need To Know About Netflix's New Superhero Series.

The storyline will see Reginald’s children scattered across a three-year period in Dallas, Texas. Why? Because Number Five used his powers to escape from Vanya’s 2019 apocalypse. The superheroes will now have to reunite to find a way to stop the end of the world and also return to their original timelines. The trailer is filled with a lot of thrills and is packed with humour that continues to remain at its core. Singer Duffy Demands Netflix to Take Down ‘365 Days’, Says the Polish Film Normalises Kidnapping and Rape.

(The above story first appeared on LatestLY on Jul 08, 2020 08:25 PM IST. For more news and updates on politics, world, sports, entertainment and lifestyle, log on to our website latestly.com).