The Verdict - State Vs Nanavati trailer is out and we found it more promising than any of its previous attempts. Based on a real-life incident, this Manav Kaul's courtroom drama promises enough drama to keep you entertained. 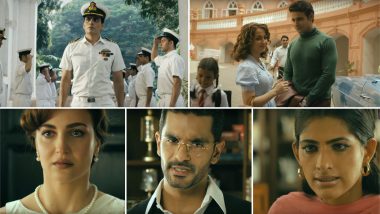 The trailer that released today will highlight the courtroom drama and how an ordinary murder case became so extraordinary. An honest navy officer's confession leads to a series of communal politics that we witness even today. Manav Kaul plays the naval officer and he demands your attention with his brilliant portrayal. Elli Avrram as his wife is convincing but Angad Bedi takes home the trophy for intimidating you with his few scenes. He plays an impressive lawyer and we're rooting for him already. Alt Balaji Code M’s Plot Details Out Now: Jennifer Winget Plays Powerhouse Lawyer- Read On For More Details Out.

Watch the trailer below

Honestly, going by its first trailer, The Verdict looks better than Akshay Kumar's Rustom and we mean in its approach. From its in-depth narrative to the plot details, this new web series promises to be a thrilling ride and we are so looking forward to it.

(The above story first appeared on LatestLY on Jun 30, 2019 04:28 PM IST. For more news and updates on politics, world, sports, entertainment and lifestyle, log on to our website latestly.com).