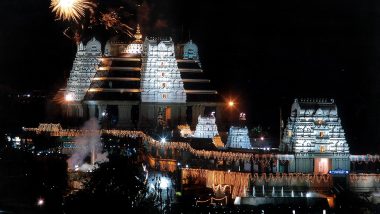 Due to a surge in Covid-19 cases, the temple was closed to the public. The festivities were streamed live on its official website (www.iskconbangalore.org) and social media platforms.

It was also streamed live on 45 YouTube channels which was watched by over 5 lakh from about 30 countries, including the USA, Australia, Italy, Saudi Arabia and Russia. The temple also received more than 75,000 free puja registrations. Pongal 2022 Rangoli Designs & Sankranthi Muggulu Patterns: Simple Dots Kolam Designs To Decorate Your Home For The Harvest Festival (WatchVideos).

The festival celebrations began early in the morning from 3 a.m. onwards with Suprabhata Seva to Sri Srinivasa Govinda, followed by an elaborate panchamrita abhisheka accompanied by priests chanting Vedic hymns.

The Lord also received a ceremonial bath with herbal water, fruit juices and fragrant flowers. After the abhisheka, a grand arati with multiple artistic lamps was offered to the Lord. Sri Srinivasa Govinda was adorned in a special Raja Gopala alankara bearing Rajamudi ornaments.

The Utsavar deities of the temple were taken in a procession around the Rajagopura and were gracefully seated on the Vaikuntha Dwara, a huge golden door installed in the northern entrance of the temple representing the gate to Vaikuntha.

Kalyanotsava, the sacred marriage of Sri Krishna with His consorts Rukmini and Satyabhama was performed as a part of the celebrations. Laksharchana Seva was also performed where devotees continuously chant 108 names of Krishna from morning till night. On this occasion, children offered Laksharchana Seva to show their unique gesture of devotion by chanting one lakh names of the Lord in front of Sri Srinivasa Govinda.

(The above story first appeared on LatestLY on Jan 13, 2022 06:34 PM IST. For more news and updates on politics, world, sports, entertainment and lifestyle, log on to our website latestly.com).