Gujarat Shocker: Street Vendor, His Son and Nephew Beaten Up by Cops in Rajkot; Inquiry Ordered

The Rajkot Commissioner of Police has ordered an inquiry into the allegations that some policemen beat up a street vendor, his son and his nephew. 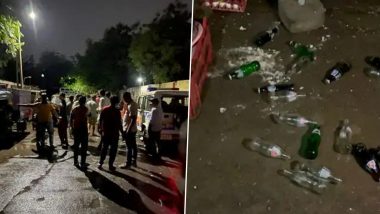 Rajkot, June 27: The Rajkot Commissioner of Police has ordered an inquiry into the allegations that some policemen beat up a street vendor, his son and his nephew.

Their only crime was that they asked the policemen to pay the food bill.

The incident happened on Sunday night when a street vendor alleged that some eight to nine police personnel ruthlessly beat him and his family members.  Delhi: Cop Assaults Restaurant Owner, Ex-Police Officer in Dwarka, Arrested

After getting information from media and social media about police atrocity allegations, Rajkot police commissioner Raju Bhargav ordered an inquiry. Assistant Police Commissioner level officer will inquire into the allegations, and if there is any truth is found in the allegation, departmental action will be initiated against the responsible police personnel.

Razak Pipalvadia, an egg shop owner on the road side near Hemu Gadhvi hall, has alleged that on Sunday late night, crime branch constables Dhambha Zala, Gajubha Parmar, Navdeepsinh's cousin and five others had eaten egg and other items. After they completed dinner, when Razak asked for the payment of the bill, Dhambha and others beat him, his son Haidar and his nephew.

Razak's allegation is that the police beat his 12-year-old son Haider ruthlessly. After he raised the voice and threatened to complain, he received calls from the police department asking him to compromise and bury the issue.

Determined to go ahead, he lodged an official complaint, as he said he will never forgive those police personnel who beat his son, even though he has to shut down his shop forever.

(The above story first appeared on LatestLY on Jun 27, 2022 04:05 PM IST. For more news and updates on politics, world, sports, entertainment and lifestyle, log on to our website latestly.com).