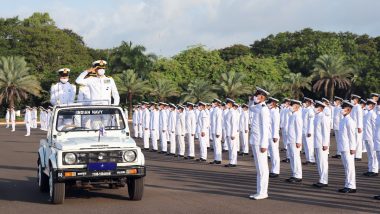 The Navy Day is an annual affair which sees splendour celebrations across the length and breadth of the country. The December 4 was chosen as Navy Day, because the Indian Navy sank 4 Pakistani vessels during the Indo-Pak 1971 War, thus marking India's superiority in the war. During "Operation Trident", an offensive operation launched by the Indian Navy on the Karachi harbour, saw hundreds of Pakistani personnel die in the attack. Indian Navy Day: WhatsApp Stickers, Quotes, SMS and Messages for the Day That Honours Country’s Naval Forces.

On the Occasion of the Navy Day 2020, Here Are Some Interesting Facts About The Indian Navy:

(The above story first appeared on LatestLY on Dec 04, 2020 08:00 AM IST. For more news and updates on politics, world, sports, entertainment and lifestyle, log on to our website latestly.com).