According to a recent tweet by a Twitter user @raydeep, the EPFO data has been stolen by hackers exploiting the vulnerabilities in the website aadhaar.epfoservices.com. The tweet also mentioned that a shocking letter of Central Provident Fund Commissioner Dr VP Joy to CSC revealed the data leak. 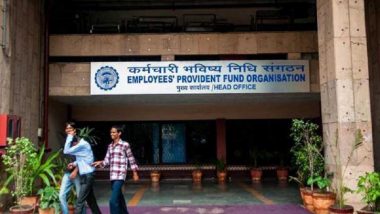 New Delhi, May 2: In a shocking revelation, Aadhaar details of employees registered under retirement body Employees' Provident Fund Organisation (EPFO) have been leaked. According to tweets by Twitter users @raydeep and ‏@arvindgunasekar, the EPFO data has been stolen by hackers exploiting the vulnerabilities in the website aadhaar.epfoservices.com.

The users attached the letter stating the data leak.  In a letter titled 'Secret' dated March 23, EPFO said that the central intelligence bureau had intimated of “hackers exploiting the vulnerabilities prevailing on the website (aadhaar.epfoservices.com) of EPFO.”

The letter has a subject saying, “Data Theft from ICT Infrastructure of Aadhaar Seeding Service for Employees’ Provident Fund Organisation”. The letter said, “You are requested to deploy immediately your Technical Team in order to plug in the identified as well as other vulnerabilities if any”.

Aadhaar case in SC at the last stage, how will the Govt defend this now ? pic.twitter.com/yYQJ3qDiCh

Currently, of the 4.6 crore contributing members, as many as 2.75 crore have seeded their Aadhaar with their PF accounts. However, out of this 2.75 crore, 1.25 crore Aadhaar numbers have been verified. The EPFO has a mandate to verify all Aadhaar-seeded PF accounts for the switch to AEPS, which is seen to completely change the experience and efficiency of services for the better.

EPFO denied any Aadhaar data leak. Here is the clarification of the same:

@PIB_India An important Press Release from EPFO on certain falsehood being circulated in the Social Media platform about vulnerabilities in the EPFO data. pic.twitter.com/Hel91CW2f6

However, LatestLY does not verify the authenticity of the above-mentioned letter. We shall update as soon as we get further information.

(The above story first appeared on LatestLY on May 02, 2018 10:38 AM IST. For more news and updates on politics, world, sports, entertainment and lifestyle, log on to our website latestly.com).