The Rashtrapati Bhavan (RB) has conveyed to the Prime Minister’s Office (PMO) its unhappiness for dragging it into the controversy over the National Film Awards. 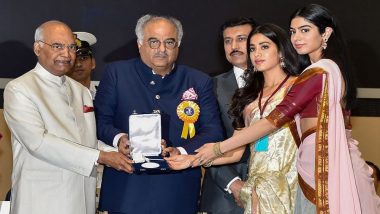 New Delhi, May 5: The Rashtrapati Bhavan (RB) has conveyed to the Prime Minister’s Office (PMO) its displeasure for dragging it into the controversy over the National Film Awards. According to reports, The Rashtrapati Bhavan believed that the controversy erupted due to the mismanagement on the part of the ministry of information and broadcasting (MIB).

On Thursday around 50 award winners skipped the ceremony. They were disappointed because of the decision that President Ram Nath Kovind would hand over only 11 honours and that this was conveyed to the awardees only a day before the event. According to the President’s Office, It had already been conveyed to the MIB in March that the President would spend only an hour at the event. The ministry then shortlisted 11 names handed over the list to the President’s Office.

One of the officials of the President’s office said, “It’s a breach of faith by MIB. The impression created that it was a last minute decision taken by the office of the President is wrong and has demeaned the institution. The turn of events has distressed the President and it has been communicated to the PMO,” reported Hindustan Times.

The PMO has not yet responded to the message. It is a usual practice of President giving awards to the National Award winners. It was only during the rehearsal of the awards that the awardees were told that the President would give away only 11 awards. However, The MIB has not given any explanation as to why awardees were not informed about the decision. Hindustan Times referring to a spokesperson of Rashtriyapati Bhavan published that It had been a regular practice adopted by President Ram Nath Kovind of spending only one hour time in all functions except Republic day or any other important meeting.

(The above story first appeared on LatestLY on May 05, 2018 04:45 PM IST. For more news and updates on politics, world, sports, entertainment and lifestyle, log on to our website latestly.com).