Weather Forecast: Rainy Spell Over North India for Next 3 Days; Cold Wave Over MP, UP and Punjab 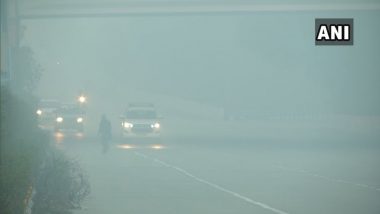 Mumbai, January 21: India Meteorological Department (IMD) forecasted that the entire northern plains will have a rainy spell for the next 3 days. IMD predicted isolated to scattered rainfall over Punjab, Haryana, Chandigarh, Delhi, West Uttar Pradesh, and East Rajasthan on January 20 and 21. Later, it will spread and intensify on January 22 and 23. According to IMD. peak rainfall is expected on January 22 and 23, and it will start diminishing on January 24. IMD has also predicted isolated to scattered rainfall/snowfall over parts of Jammu and Kashmir, Ladakh, Muzaffarabad, Himachal Pradesh, and Uttarakhand during the next 2 days and increase thereafter.

IMD said that Punjab is very likely to receive heavy rainfall on January 22. Meanwhile, Bihar, Jharkhand, and West Bengal are also expected to have scattered to fairly widespread rainfall from January 22 to January 24. Winter Healthcare Tips: 5 Common Mistakes to Avoid in Winters And Be Healthy This Season.

At 0830 hrs IST, Dense to very dense fog is reported at Punjab (visibility at Ludhiana and Ambala 25 m each, Patiala 50 m); Haryana (visibility at Hisar and Karnal 254 m each); Uttar Pradesh (Visibility at Agra 0m, Bareilly and Gorakhpur 25m each, Meerut and Lucknow 50 m each );

IMD has forecasted isolated thunderstorms with lightning over the northern plains and sub-Himalayan region on January 21 and 22. It is expected that parts of Punjab, Haryana, Chandigarh & Delhi, Rajasthan, and west Uttar Pradesh will reel under strong surface winds of about 20 to 30 kmph on January 21 and 22. Meanwhile, Bihar is likely to have the same conditions on January 22 and 23. The prevailing condition will move over to the east to Jharkhand and Gangetic West Bengal on January 23.

According to IMD, Punjab, Haryana, Uttar Pradesh, and Madhya Pradesh will likely have a cold day to severe cold day conditions during the next 24 hours and over Bihar during the next 2 days. Healthy Winter Fruits: Build Stronger Immunity This Winter Season With These Fruits.

(The above story first appeared on LatestLY on Jan 21, 2022 10:14 AM IST. For more news and updates on politics, world, sports, entertainment and lifestyle, log on to our website latestly.com).