The Delhi Police has registered an FIR against Director Leena Manimekalai, a day after a complaint was lodged against her over a controversial poster of her new documentary, a senior police official said on Tuesday. The poster was shared by Manimekalai on social media on July 2. 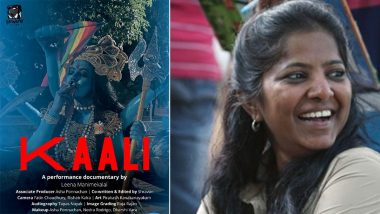 New Delhi, July 5: The Delhi Police has registered an FIR against Director Leena Manimekalai, a day after a complaint was lodged against her over a controversial poster of her new documentary, a senior police official said on Tuesday. The poster was shared by Manimekalai on social media on July 2.

Delhi Police spokesperson Suman Nalwa told IANS that a complaint was received by the police regarding the poster on social media of Goddess Kaali shown smoking a cigarette.

"From the contents of the complaint and the alleged post, prima facie, an offence under section 153A (Promoting enmity between different groups on grounds of religion, race, place of birth, residence, language, etc., and doing acts prejudicial to maintenance of harmony) and 295A (Deliberate and malicious acts, intended to outrage religious feelings of any class by insulting its religion or religious beliefs) of the Indian Penal Code was made out," the police official said.

The FIR has been registered at the Intelligence Fusion and Strategic Operations (IFSO) unit of the Delhi Police's Special Cell police station. "Investigation in the matter has been taken up," the official added.

The poster sparked off a massive uproar on social media and the demand to arrest the director trended on Twitter. The documentary revolves around the events that take place one evening, when Goddess Kali appears and strolls on the streets of Toronto.

The complaint against Director Leena Manimekalai was lodged by a Delhi-based lawyer and activist Vineet Jindal on Monday. "The Director has hurt my religious sentiments by showing Goddess Kaali smoking which is highly objectionable and not acceptable in any manner," Jindal told IANS.

"This deliberate and malicious act, intended to outrage religious feelings of Hindu community through highly objectionable video and photo from her Twitter account by the accused which is well circulated in social media and all public platforms is an offence under section 295A, 298, 505, 67 I.T Act and 34 IPC and therefore penal action should be taken against the accused," the complaint filed with the Cyber Cell of Delhi Police read.

The lawyer said that the objectionable video clip and photo must be banned and removed from the Internet immediately considering the defamatory impact and outrage it would cause to Hindus as it has disparaged the religious beliefs of a community.

On Monday, the Indian High Commission in Canada also urged the organisers to withdraw all provocative material related to the 'Kaali' documentary. In a statement, the High Commission said that they have received complaints from leaders of the Hindu community in Canada about "disrespectful depiction of Hindu Gods on the poster of a film showcased as part of the 'Under the Tent' project at the Aga Khan Museum, Toronto".

(The above story first appeared on LatestLY on Jul 05, 2022 05:08 PM IST. For more news and updates on politics, world, sports, entertainment and lifestyle, log on to our website latestly.com).