The court further said, hence, there is no sufficient evidence on record on the basis of which charges can be framed against these three accused. Accordingly, they are liable to be discharged. 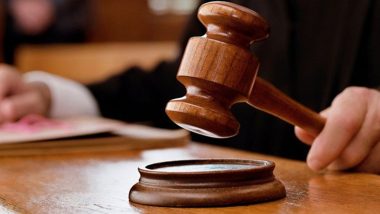 New Delhi, April 4 (IANS) A court here has discharged three accused in the 2020 Delhi riots case, noting that "it would be a sheer wastage of judicial time if charges are framed against them".

Additional Sessions Judge Virender Bhat of the Karkardooma court in North East Delhi said even if the evidence sought to be adduced by the prosecution against these accused remains unrebutted during the trial, their conviction cannot be ordered in view of the Rule laid down by the Supreme Court verdict in Masalti's case which mandates that there should be at least two prosecution witnesses to identify the role and involvement of the accused in the incident in question. PM Narendra Modi Congratulates Hungarian PM Viktor Orban on Winning Parliamentary Election.

"Charges cannot be framed against these accused upon taking into account the material annexed with the charge sheet on the basis of which there is no 10/10 possibility of their conviction at the final stage. It would be sheer wastage of judicial time if the charges are to be framed against the accused upon consideration of the evidence on the basis of which they have to be acquitted later on," the court said in the order dated April 2.

The court further said, hence, there is no sufficient evidence on record on the basis of which charges can be framed against these three accused. Accordingly, they are liable to be discharged.

As per the police, the three accused -- Nitin, Shyam and Shiva -- have been charge-sheeted under Sections 308 (attempt to commit culpable homicide), 147 (rioting), 148 (rioting, armed with a deadly weapon), and 149 (every member of unlawful assembly guilty of offence committed in prosecution of common object) of the Indian Penal Code and Section 27 (punishment for using arms) of the Arms Act, 1959.

(The above story first appeared on LatestLY on Apr 04, 2022 02:35 PM IST. For more news and updates on politics, world, sports, entertainment and lifestyle, log on to our website latestly.com).