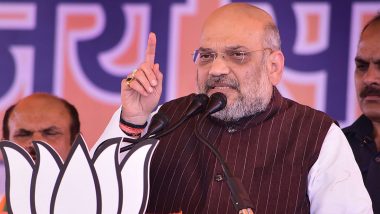 New Delhi, August 18: Union Home Minister Amit Shah was admitted to Delhi's (All India Institute of Medical Sciences) for post COVID care on Tuesday. The hospital informed that "Amit Shah is comfortable and is continuing his work from the hospital." Earlier on August 14, Shah had tested negative for coronavirus.

According to the press release issued by AIIMS, Amit Shah was complaining of body aches and fatigue for the last 3-4 days and hence he was admitted for post-COVID-19 care in the hospital.  The home minister was diagnosed with COVID-19 on August 2 and was admitted to Gurugram’s Medanta Hospital following the advice of doctors. Amit Shah Tests Negative for COVID-19, Union Home Minister Issues Confirmation on Official Twitter Handle.

Home Minister Amit Shah has been admitted to AIIMS(All India Institute of Medical Sciences) for post COVID care. He is comfortable & is continuing his work from hospital: AIIMS, Delhi

He was discharged from Medanta Hospital,Gurugram on 14 Aug, after testing negative for #COVID19 pic.twitter.com/Im85xpAii9

Shah had then taken to social media and had said he was being admitted to the hospital. When he turned negative, he took to social media to inform everyone about his health status. In another tweet, the Home Minister had also thanked the doctors and medical staff at the Medanta Hospital for treating him and taking care of him.

(The above story first appeared on LatestLY on Aug 18, 2020 10:48 AM IST. For more news and updates on politics, world, sports, entertainment and lifestyle, log on to our website latestly.com).