In their desperate attempt to raise money for treatment of 16-year-old daughter, parents allegedly sold their 12-year-old younger daughter to a neighbour for Rs 10,000. 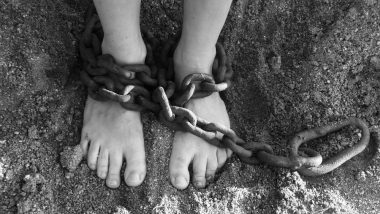 The police detained the "buyer", identified as 46-year-old Chinna Subbaiah. According to a report, Subbaiah’s wife had left him following marital dispute and he had his eye on the minor. Meanwhile, the girl's parents were struggling to get money for treatment of their eldest daughter who was suffering from respiratory illness. In order to raise money for her treatment, the couple allegedly sold the minor to Subbaiah. Andhra Pradesh Shocker: Estranged Lover Burns Woman Alive in Vijayawada, Both Die as She Holds Him While Burning.

The report said Subbaiah married the girl and brought her to his relatives’ house in Dampur village. Neighbours heard her screams and cry after which they informed ICDS officials. "When neighbours went to his house, Subbaiah admitted the whole thing as if there was nothing wrong in what he had done," an ICDS official was quoted as saying.

The minor girl has been sent to a district childcare centre where she is being counselled. Police have registered a case against Subbaiah and detained him.

(The above story first appeared on LatestLY on Feb 27, 2021 02:24 PM IST. For more news and updates on politics, world, sports, entertainment and lifestyle, log on to our website latestly.com).