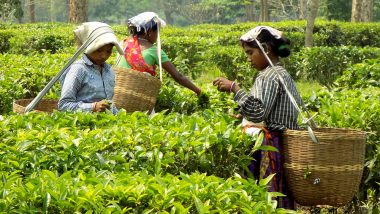 More than 93 per cent of the total teas on offer got sold. Buyers had logged in from Assam, West Bengal, Delhi, Gujarat and Rajasthan. Pabhojan Orthodox tea was sold at a record price of Rs 4,000 per kg. Diroibam Speciality Green tea was sold at Rs 1,000 per kg, and the famous Hookhmol CTC tea fetched Rs 510 per kg - also record prices in their respective categories. Purple Tea Fetches Rs 24,501 for 1.2kg Guwahati Tea Auction Center.

The event organised by mjunction elicited positive response from buyers and sellers alike.Assam's Dispur based aTea World' Directors Kamal Sharma and Pradeep Sharma, who purchased Hookhmol CTC from the platform at Rs 510 per kg, said : "With shorter cycle time, teas sold on the mjunction platform are the freshest. We have had our own packet with brand name Shree Mangalam since 2002, and we are committed to give our customers the best of Assam tea."

Director of Real Assam Tea Industries, which supplied the Hookhmol CTC, Bhaskar Hazarika, said, "Tea estate companies are the only private sector enterprises that has survived in Assam for two centuries despite all hostilities. Assam tea estates have survived the nationalization bid, extreme regulation, Land Ceiling Act and agitations of all kind since 1947, but right now we are facing unprecedented challenges."

Hazarika said that the average price of tea in the primary market (auctions) has not increased from 2012 to 2019.

Nazrana Ahmed of Diroibam Tea Estate, whose Green Tea was sold at Rs 1,000 per kg, said, "Today's special auction is of special significance to us, as we have received the highest bid for our Specialty Green Teas."

Nilesh Divekar of Shangrila Enterprise, who purchased Pabhojan Orthodox at Rs 4,000 per kg, said, "I appreciate the efforts of the mjunction team to provide such a platform where best of the teas are available fresh and in small quantities without any hassles."

Rakhi Saikia of Pabhojan Tea Estate lauded mjunction's efforts on the occasion. "I am very happy that Pabhojan has fetched a record price, and I hope the mjunction platform continues the good work," she said.

Assam, which roughly accounts for 55 per cent of India's total tea production of 1,389.70 million kg, has 856 large tea gardens and over a lakh small tea growers, engaging around 10 lakh workers in this industry.

(The above story first appeared on LatestLY on Jun 22, 2021 11:28 PM IST. For more news and updates on politics, world, sports, entertainment and lifestyle, log on to our website latestly.com).